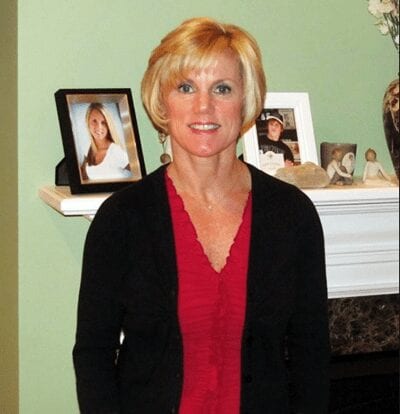 As uncomfortable as this is to admit, I occasionally think about my kids dying. It’s something I hate to ponder; something I squeeze out of my cranium ASAP. But still, sometimes, it creeps in there. How would I respond? Could I go on? Would I have the will to live? Even now, as I type the words, it’s painful. My children are, truly, my everything. Without them, well, what do I have left? Four years ago, on an awful afternoon in May in North Branford, Connecticut, Lynn Riordan experienced every parent’s absolute worst nightmare. Her son, Matt Picciuto, was killed in a car accident not far from his Connecticut home. He was 18, and driving too fast, too recklessly along Totoket Road when he crashed into a tree. This is what his vehicle looked like in the immediate aftermath …

Wanna learn about strength? About decency? Despite the pain and despite the heartbreak, Lynn Riordan wants young drivers to look at the above image. She wants them to stare and stare and stare some more, and imagine themselves driving too fast, losing control, spiraling out of control, ruining everything. She has decided to take her son’s death and discover a positive. That’s why she started Matt’s Mission, a charitable foundation with the purpose of promoting safe driving. That’s why she’s this week’s incredible, stronger-than-steel Quaz. Lynn Riordan, welcome … JEFF PEARLMAN: How do you continue? How do you go on? You seem to have this amazing strength and ability to take a parent’s worst nightmare and, in a sense, do something with it. Lynn, how? LYNN RIORDAN: Prior to Matthew’s death, I use to say to my kids when they left the house, “Please be careful. If anything ever happens to you, I will not survive.” It was just my way of wanting my kids to think so they would come home safe. As soon as I heard about Matthew’s accident, I called my mother and sister. I asked them to come to my house to be with my girls—Elise, then 16, Alexa, then 13, and Mea (MEA—M=Matt, E=Elise, A=Alexa), then 3. When I called the house to tell my mom and sister that Matt had died, I could hear my daughter Elise saying “Don’t leave him there, tell my mom she can’t leave him alone.” The she said, “My mother is not going to survive this. Nanny, you don’t understand, my mom is not going to survive.” I am able to continue and go on because I am a mother. I have three children who need me and a wonderful husband who deserves his wife. I have a lot of life left to live and I want to be happy and have a good life.

J.P.: The mission statement for your charity, Matt’s Mission, reads: “To raise funds to aide local students in need; to encourage everyone to slow down and to drive safe while raising awareness to the consequences of destructive driving decisions.” Lynn, why do you think—even after so many accidents through the years—young people continue to drive so recklessly? And is there really a way to stop the behavior? L.R.: No–there is no way to stop this behavior. I don’t understand it … lack of brain development? Kids think it is never going to happen to them. I don’t get it. I think if you are afraid to ski because you might get hurt—how are you not afraid to drive fast? J.P.: You have a 19, 17 and 7-year-old daughters. How does a parent change when she loses a child? L.R.: I am more afraid that something is going to happen to one of my children. When I hear sirens and my kids aren’t home, I have to check-in. I do my best not to be protective and for them to live their lives. When Elise and Alexa got their licenses, I was scared to death. Let’s put it this way—I sleep well when everyone is home. I try not to sweat the small stuff (messy rooms) knowing how fragile life can be but I believe I push my kids just as hard as I would have otherwise. I always did and will continue to tell my kids how much I love them. J.P.: What’s your life background? I know you live in Connecticut, I know you work as a radiation therapist at Shoreline Medical Center in Guilford. But how did you get here? What’s your life path? L.R.: On November 10,1963 I was born in Charlottetown, Prince Edward Island, Canada. At the age of seven, I moved to the United States with my parents, three sisters and brother. Living in Milford, Connecticut, I graduated from Milford High School in 1981. After that I went to school to become a radiologic technologist and then a radiation therapist at South Central Community College. I graduated in 1986. I lived in Orange for many years and moved to North Branford in 2004. Since then I have been working as a radiation therapist in Radiation Oncology at the Shoreline Medical Center in Guilford. Simple things—such as gardening, competing with my neighbors over whose grass is greener and hanging out by my pool—make me happy. My favorite time of year is anytime on vacation with my family and friends. Although I have exercised my entire life, 9Round kickboxing is a passionate favorite. My greatest accomplishment, hands down, is being a mother to Matt, Elise, Alexa and Mea. I am very proud of my children and grateful to be sharing this journey called life with them. I would not be who I am today without the love and support of my wonderful husband Mark, to whom I have been married to for almost nine years. It would not be right if I did not also mention another family member—my dog Penny. She is a Cavapoo and very much adored. There was a time I could say I had it all. There was nothing in my life I needed or wanted to change. I honestly felt my life was absolutely perfect. That all changed on Saturday May 23, 2009, when my son Matthew died in a car accident. After suffering with the devastating loss and having experienced the amazing love and support of an entire community, my family and friends, I was inspired to establish Matt’s Mission Fund, a nonprofit organization which gives back to so many living North Branford. My future plans are to keep doing just what I am doing for many, many years to come. I love working at the Shoreline Medical Center. There is no greater pleasure than watching my kids grow and hanging out with my family and friends. Matt’s Mission Fund has grown bigger than I ever imagined. Yes, my plan is to keep doing just what I am doing for many years since one of my goals is to live to be 100.

J.P.: This might be sort of a random question, but when tragedies like Sandy Hook happen, do you view them differently than you might have before May 23, 2009? Do they impact you differently? L.R.: They do not impact me as much as they would have otherwise. I don’t engage as much. If I did I would feel the parents’ pain while having an understanding for what they are going through as only people who have lost a child can. I know they are hurting and I also know they will feel better if that is what they choose. J.P.: How much of starting a charity is strictly about doing righteous deeds, and how much of it is about keeping your son’s memory and legacy alive? L.R.: Before Matt’s death I thought of getting involved with a charitable organization. I like to do for other people. I would say it is more important to keep my son’s memory alive. I have created the best of both worlds—I do for others and if I have anything to do with it, people will not forget my son. J.P.: It’s been four years. What do you think Matt would be doing today? And what do you think his future held? L.R.: Matt would be graduating from college as all of his friends are doing right now. Matt wanted to be a teacher. J.P: What advice would you give to others who lose children? What has helped ease the pain? What steps have you taken, in your own life, to carry on? L.R.: Unfortunately, there is no advice I can give other people. Although five people live in my house, we have all dealt with the pain in our own way. We are all on our own. What works for me doesn’t work for someone else. There is no advice that works and no quick fix to heartache. The love of my family, friends and community has helped me. I realize that my story is bad—but it could always be worse. The boys with my son could have been injured or died. He could have killed people he passed on the road that day. I look at the silver lining and go with it. I roll out of bed every day—that is a start. I then do the best I can. That is all any of us can ever do.

QUAZ EXPRESS WITH LYNN RIORDAN: • Five reasons for one to make North Branford his/her next vacation destination?: Vacation in North Branford? I would not advise it. Matt’s Mission 5K road race is one of two big events that take place in town. Ha—great place to live, but vacation? No. • Hardest part about running a charitable foundation?: Delegating responsibility I find to be difficult. Worrying about the forecast since our big fundraiser is outside. Otherwise, running a nonprofit is a lot easier than I thought. • Do you think the current driving laws are working as they should?: I think the new laws are saving lives between the ages of 16 and 17. Unfortunately the death rate has gone up for 18-to-20-year olds. Stiffer penalties are in order. The police department needs to do away with the warning. If you get pulled over, you get a ticket. Hitting people in their purse seems to make people pay attention. • Greatest place you’ve ever visited on vacation?: Tough one … I would say going back to PEI Canada. It was both beautiful and emotional. • Strangest thing you’ve ever seen as a radiation therapist?: If you said sad, that would be easy. Strange, hmm—I don’t have an answer. • Best joke you know?: I am the worst joke teller. Again, I am at a loss. Consider yourself lucky. Hahaha • Should the Yankees stick with Lyle Overbay at first?: I don’t follow baseball. I could ask my brother Stephen—he is a huge Yankee fan. • Five things always in your purse?: Wallet, ChapStick, calendar, pen, eye glass case. • You wake up at 6 o’clock every morning. Why?: I have become a morning person. Sometimes I get up earlier … For example, on Mother’s Day I was up and out at 5:45 gardening in the rain. I stayed in the backyard so my neighbors would not think I am nuts.