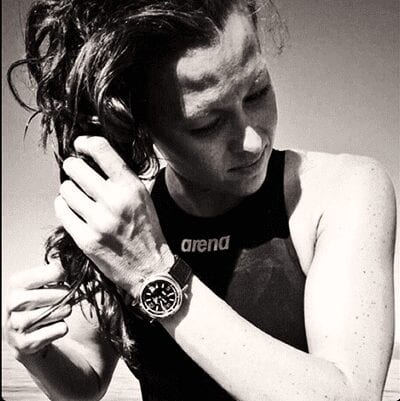 Brooke Bennett is perhaps the most decorated athlete to ever grace the Quaz. Yeah, we’ve had Shawn Green here. Ellis Valentine and Bev Oden and Doug Glanville, too. But Bennett, well, she’s got gold. Lots and lots of gold. She made her Olympic swimming debut at the 1996 Atlanta Games, beating the the legendary Janet Evans to win the 800 meter freestyle. Four years later she topped that, taking both the 400 meter freestyle and the 800 meter freestyle (in Olympic-record time).

What always fascinates me about Olympians, though, is what happens after the experience ends and they’re forced to move forward. How do they cope? How does it work out? Are the haunted by what was, but can never be again?

Enter, the awesome, engaging Booke Bennett—new Open Water swimmer and TV host (who one can follow on Twitter here).

BROOKE BENNETT: Take the lyrics from Soja—”When We Were Younger” …

It makes sense—we do spend our lives chasing dreams … but it is how you make the memories that make it all worthwhile. I’ve got amazing memories and I am chasing more …

J.P.: Here’s what I know—first swim lesson at 3, first team at 5, sweetheart of the 1996 Olympics at age 16, three gold medals total. But how, Brooke, did you really get into swimming? Were you forced into the pool? Was it a natural love?

B.B.: I’ve always been a waterbabi! The summer I was born my grandparents (my mom’s parents) built a pool, and I never wanted to get out. Because of my love for it and my diagnoses of ADD/ADHD, my mom knew that swimming was the way to go. She never put me on medications, instead she allowed me to do what I loved. It worked!

By the time I was 8 or 9, the dream was mine, and my parents allowed me to pursue my dream. I was never forced to swim—only positively pushed to reach my dreams.

J.P.: In 2000 you were on a Wheaties box. I’ve never asked anyone this, but I’m riveted. Wheaties box is equated as a great honor, a great achievement, etc … etc—and I’m NOT trying to take away from that. But, come day’s end, aren’t you merely being used by General Mills on the cheap and under the guise of “honor” to peddle a pretty crappy tasting cereal?

I love spinach! Good or bad—it’s all a matter of your taste buds’ opinion. But growing up, you know If you’re one of the lucky ones to grace the cover of the Wheaties box, then maybe the word “legendary” can go with your name as being one of the best in sports …

J.P.: Can anyone be a great swimmer? What I mean is, were you born with a gift that matched the water, or if say, my relatively uncoordinated 10-year-old daughter devotes her entire life to the pool, can she be great, too? Is it more a matter of hard work or talent?

B.B.: You can be great at anything you put your mind too. Plus your heart! But what follows is sacrifice—often being missed. Ask those that excel above and beyond, you have to be willing to pass up on things and look at the bigger picture. In other words, sacrifice=reward.

As for talent, I’ve never been considered the one with the most. But I’ve heard my name mentioned often in the sentence of being the hardest worker.

J.P.: You’ve won three gold medals. Literally, what is running through your mind when you’re standing on the podium? Is that the great moment—standing there, the anthem playing? Does it come later, in hindsight? Does it come before, when you’re in the pool? In other words, when is the high the highest? What’s the peak, peak, peak moment?

B.B.: I guess I felt that times three—1996 I was numb, I couldn’t grasp it all; I was more absorbed in the thought of my grandfather and his overall happiness (he passed April 27, 1996). Everything about my swimming career is because of him.

In 2000 the moment of touching the wall was the highest of highs. My emotions took over. I was in a complete state of shock of my accomplishments—the 400 was never my best event, the 800 not only was a repeat but I also went under the 8:20 mark, breaking the Olympic record that stood for eight years.

J.P.: You attempted two comebacks, in 2004 and 2008. I’ve covered many comebacks, and behind the “I just love the competition” banter always seems to be a certain heartbreaking reality that one doesn’t know how to adjust to post-sports life. Am I off on this? And, once you officially retired, how did you accept that it was over?

After the 2000 Olympic games I underwent double shoulder surgery in November 2001. I rehabbed and worked my way back to a third place finish in the 800 free at the  U.S. Olympic Trials. I was never completely away from the sport; I competed on and off until I retired in January 2008.

The only reason I am back is to do things I’ve yet to do. Open water began to surface in early 2000s, to be then introduced into the Olympics in 2008. So along with wanting to tackle the 10k, I am also venturing into marathon swims (I completed my first one on April 20, 2013—the 24-mile Tampa Bay Marathon Swim).

J.P.: Can you swim for fun? Like, can you head over to the YMCA, jump in the pool and just flop around. Or, in your mind, are you thinking, “I can smoke all you fools”?

B.B.: I am a Florida girl, so beaches and water activities surround me. Just the other day I was on the boat checking crab traps, fishing and enjoying a lunch and swim on an island with my boyfriend.

J.P.: You now work as a sportscaster with the Bright House Sports Network. I’ve seen many ex-athletes who find TV work more fulfilling than playing the sport (Jamal Mashburn has repeatedly said he likes being on TV more than he liked being on the court) and others who find it terribly frustrating talking, but not doing. Where are you on the spectrum, and what have been the challenges, adjusting to TV?

B.B.: The demands and the goals in swimming and TV compare a lot and at first I had to go through some growing pains to learn the ropes. But through the blood, sweat and tears I began to find my way.

The biz is competitive and there will always be people behind that want to rise above you, so I set my sights high and continue to build off what makes me unique. I use the experience of being on both sides of the camera to conduct my interviews and tell stories in a way that I would want something told about me.

Currently I find myself in the mix of both worlds, which creates a whole new set of challenges. I want to continue building my resume in the sports broadcasting world, while also steering the ship toward an Olympic comeback. There is no answer on how to do it … all I can do is continue to work on balancing so that both bosses are satisfied. Sometimes it is smooth, while other times I near breakdown status.

J.P.: How big of a problem are PEDs in swimming? Did you ever use performance enhancers and, if not, were you ever tempted? Irregardless, can you understand how the athlete who cheats still gets fulfillment from a tainted win? That’s one thing that’s always baffled me—you know you cheated, so is it even an accomplishment?

B.B.: This is something I have zero interest in. I can’t control what others do. I only have to remain focused on my goals, train hard and give my body the proper and fair things it needs. The job of keeping the sport clean falls in the hands of the USOC and FINA. They can handle those who choose to cheat.

J.P.: How do you explain the love of swimming? Like, most humans get in a pool, are happy for 20 minutes, then wanna get the hell out.

B.B.: As my grandfather said before I could crawl, “She is a waterbabi!” You couldn’t get me out of the pool as a kid and I’ve never lost it. It has changed over the years, on what draws me to that ‘love.’ As a kid I used it to burn extra energy and as an adult, it is my time to get away from the world around me and just enjoy something that I have a passion for.

But Open Water is what re-sparked that love again with new goals. There is no comparison on what I have already accomplished, each Open Water race I learn something new and we take that into the next challenge.

• Grossest thing you’ve ever seen floating in a swimming pool?: Dead bird, the turd was on the bottom (outdoor training in Florida)

• I’m a mediocre swimmer. If we race two laps, and you give me a one lap lead, do I have a shot?: You’d win! 1-that is a big lead 2-I am a horrible sprinter (being challenged by non-swimmers to a race has got to be one of the most annoying things ever!!) Now if you want to swim for an hour straight and see how far you go compared me, that is my wheelhouse!

• Do you find pool fart bubbles more funny or gross?: When you swim with gassy swimmers … lol

• Ever thought you were about to die in a plane crash? If so, what do you recall?: Knock on wood I’ve had extreme flying scares … I just hope answering this doesn’t change my luck!

• “What Would Ryan Lochte Do?” seems like an awful career move. Thoughts?: It is a career move he chose to do … I am good friends with Ryan and support his choice and would never judge him for it. For what he hopes to achieve outside of the sport—may the doors open in the fashion industry but not distract him from making a fourth Olympic Games

• Better bodies—swimmers or gymnasts? Why?: No competition there—swimmers, hands down! I like height and long-lean muscle mass.

• Best piece of advice you’ve ever received?: Two come to mind. “Never back down from something you really want” — Grandpa James Lane

“Developing tough skin is easier said than done, but you’re going to always need it because you’re a go-getter and want to do things most people can’t even fathom” — Donna “step mom” Schomer

• If you could ask Steve Balboni one question, what would it be?: Are you a superstitious player, due to the fact you were given the claim to “The Curse of the Balboni” that no team would win a World Series that had more home runs than you did from 1985? (The Curse was broken in 2001).