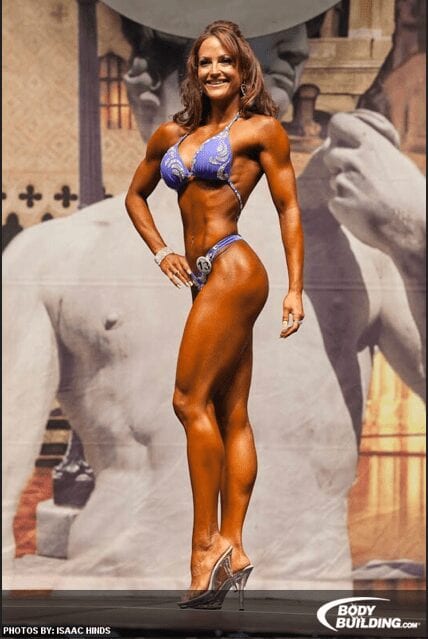 It was crazy, amazing, freaky, wonderful, scary—all in one. I met Hulk-esque women and neck-deprived guys with yellow eyes. I was offered 1,001 ways to improve my physique, and handed one free bottle after another—the labels all promising BIG! and FAST! and STRONG! and POWERFUL! Truly, it was the most, ahem, startling thing I’ve ever seen.

And then, midway through the madness, there was Erin Stern.

Erin talks normal, sounds normal, looks normal. Sure, she’s cut, and powerful, and could kick my ass 800 times over (Beating up a journalist—not something to brag about). But she was a breath of fresh air; one who took the time to explain her world and who (oh, by the way) happens to be the reigning Ms. Figure Olympia and one of the elites of her sport.

A former standout high jumper at the University of Florida, here Erin talks ice cream, PEDs, Rob Zombie and half-nude magazine cover awkwardness. You can check out her website here, and follow her on Twitter here.

Erin Stern, welcome to The Quaz …

JEFF PEARLMAN: OK, Erin, so we first met at the Arnold Classic a bunch of months ago, and I found you to be jarringly … normal. I mean, we were surrounded by (and I don’t mean to sound like a jerk here) some of the strangest women I’ve ever seen. Women with muscles atop muscles atop muscles. Women who work X-rated sites devoted to men who love women who are built like men. Women on so many crazy drugs it’d make a pharmacist dizzy. On and on. Erin, you’re a former track and field competitor. Why would you throw yourself into such an, ahem, different kind of environment?

ERIN STERN: I suppose that the old phrase is true—”Beauty is in the eye of the beholder.” I’ve always had a fascination with bodybuilding—the process, the work and the ability to turn your physique into anything you’d like it to be. The environment is different, and appears strange from an outside vantage point, but I see beauty. I would not want to attempt to gain any more muscle, but I appreciate the work that goes into it. The competition category that I’m in is a nice balance of muscle and femininity. It provides a competitive outlet for me, gives me purpose to train, allows me to travel and I’m building a good business with it. These are just a few of the reasons why I love it.

J.P.: I know you’re 33, I know you went to Florida, was an All-American in the high jump and earned a degree in environmental policy. But, Erin, what was your path from there to here? Like, how did you go from being just a kid who liked horses and track to the two-time Figure Olympia champion? What was your journey?

E.S.: How much time do you have? Kidding. In 2008, I missed the qualifying standard for the Olympic Trials in the high jump. I had a successful real estate company at the time, but felt a void in my life that athletes often get when they no longer have something to train for. A friend suggested that I try figure competitions. At first, I wasn’t sure of the idea of getting on stage in a bikini that fits into a Ziploc bag … but after winning my first amateur show, I was hooked! I had been lifting weights since college, and I already had a good amount of muscle. I turned pro at my third show and won the Figure Olympia the following year.

J.P.: Erin, I love friggin’ ice cream, and I’m unwilling to give it up. I love bread and pizza and really fatty coffee drinks, too. I can’t imagine surrendering 90% of my love of food in the name of anything. You, however, surely watch everything you eat, measure calories to the dime. To compete as you do—did you have to accept a certain dietary demise? And what, exactly, do you eat?

E.S.: Who doesn’t love ice cream? I think it’s possible to fit indulgent meals into a healthy lifestyle. In the off-season, I don’t consider any foods “off limits.” To be successful in bodybuilding, one must have a grasp on how the mind functions. By severely limiting calories and banning specific foods, we create a sense of scarcity. By knowing that I won’t be able to eat ice cream for a few weeks out of the year, but I can have it anytime after a show, helps keep me on my diet. Just like anything else in life, it all depends on how we look at a certain situation. I eat like a cavewoman. Well, I cook my food … but it’s mostly lean meats like chicken and fish, vegetables, grains such as quinoa and oats, and fruits. The idea is to keep the diet simple with single-ingredient foods. The ratio I usually follow is 40 percent protein, 40 percent carbs and 20 percent fats.

J.P.: I covered baseball in the 1990s and 2000s, which makes me immediately skeptical of all people with muscles. Erin, you’re not enormous like the people who look like houses—but you’re really cut, really muscular. Tell me why I shouldn’t be suspicious of PED usage in your career? And, with Figure as a whole, should we be suspicious? Like, of the sport?

E.S.: I think people will always be skeptical of any sport where the athlete has muscles. In college, I was obviously tested for PED usage, and I was shredded back then! Bodybuilding in general is largely based on genetics. It’s also knowing how to train to gain muscle, eating enough quality protein and having patience to put a number of years into building. What most people aren’t aware of is the wonderful combination of depletion/spray tan/posing. This is temporary, of course, but it helps us look jacked on stage. By manipulating carbs, sodium and water, I can appear to be more muscular. I practice posing at different angles to create more of an illusion of size in the mandatory poses. I’m 5-foot-8 and 135 pounds—yet people are always surprised how small I am when they meet me, compared to the stage photos. I’m a lifetime natural athlete, and I wouldn’t want to continue in the division if people didn’t share my views on PED usage.

E.S.: Luckily, where I live, there are many other people who are fitness-minded. I’ve never been a partier, and I don’t drink. So I wouldn’t be out every night at the bar, anyway. But it can be difficult to maintain a social life in the weeks before a contest. I travel quite often, have to eat every few hours and I go to sleep right after Wheel of Fortune (kidding), but it is fairly early.  It is possible to have a social, but it takes effort, just like anything else.

J.P.: You also do a lot of work as a physical trainer. What are the biggest mistakes you see people make when it comes to fitness? And why are we all so damn fat in this country?

E.S.: I think the two biggest mistakes are 1) Making excuses; and 2) Being sedentary. There is no one way to get fit, aside from just getting up and doing something! If you’re intimidated by the gym, work out outside, swim, bike, put some dumbbells in your garage. Make time for yourself … I talk to many people who are “too busy,” yet I have friends who have several small children, a full-time job … and still manage to have abs.

J.P.: There’s a photo of you on the cover of Muscle & Fitness Magazine where you’re wearing a G-string and your hands are covering your breasts. I’m wondering if shyness—in your profession, in promoting your profession—was something you at all had to overcome? In other words, is it at all difficult/embarrassing/whatever to stand before people, 70 percent naked, being judged?

E.S.: It is the most difficult part of the job. I have always been an athlete, and I’m an introvert, a big nerd. It wasn’t my style to want to flaunt my physique on stage. After my first contest, and after I saw the great results of my effort, I began to see it differently. I’m proud of my work and want to help others achieve their goals—whether they want to hit the stage or not.

E.S.: The greatest moment was winning the Olympia last year, of course! I would have to say the lowest moment of my career was at the Arnold Classic, earlier in the year. I wasn’t at my best—and it was because I hadn’t done the necessary preparations, mentally and physically. It was a great lesson, though … and it ultimately made me stronger.

J.P.: Erin, I’ve always struggled with crossing the edge. What I mean is, I ran in college, and did sorta OK. But I could never truly push myself across what I believed was the final threshold. If I needed to do, say, three more 400s, I’d do two hard, then the last one sorta kinda hard. I gave in—to mental fatigue, to physical fatigue. How do you NOT give in? When you’re exhausted? When you’re beaten down? When all you want is a nap?

E.S.: I have learned how hard I can push myself, and also when to take a rest. My goal is to look my best on stage—and to continue to look good over the years. I will admit that the last couple of weeks before a show are very difficult. I restrict calories and will sometimes train twice a day. To be competitive, you do have to possess drive. I want to be the best. There are times when all I want to do is take a nap … so I do. And I hit the gym later.

J.P.: You’ve said you want to be “the Oprah of the fitness world.” I have no idea what this means, but I’m not much of an Oprah fan. Please explain …

E.S.: Oprah has helped improve the lives of so many women—I want to do the same in the fitness world. My goal is to educate and enrich the lives of people through health and fitness. Physical strength increases self-esteem. Success in the gym equates to success outside of the gym. I want to show people that they can lead an active lifestyle, be happier, and healthier—even if they never plan on competing.

• You vs. Arnold in an arm wrestling contest—right now. Who wins, how long does it take?: Arnold wins. I think I might be stronger right now, but I respect him and wouldn’t want to beat him. It would probably take a few minutes, as I would be asking him all kinds of questions about his secrets to success.

• Would you rather take loads and loads of steroids for one year, or permanently change your name to Dogcrap Dipshit II?: Please, call me Dipshit.

• You’re working on a book. Why would anyone submit herself to such torture?: I want to share my experience and knowledge…I think we’re all put on this earth to help others.. as cheesy as it sounds, I think it’s my mission!

• How many times a year do people in your profession utter the term, “killer body”?: Less often than they utter the term, “package.” For example, “I’m training to bring my best package ever to stage.”

• My brother is 43, and he wants to pack up and travel the world via backpack and hostels. My parents aren’t happy. What should he do?: He should do what makes him happy, and go.