The greatest holiday ritual of all time 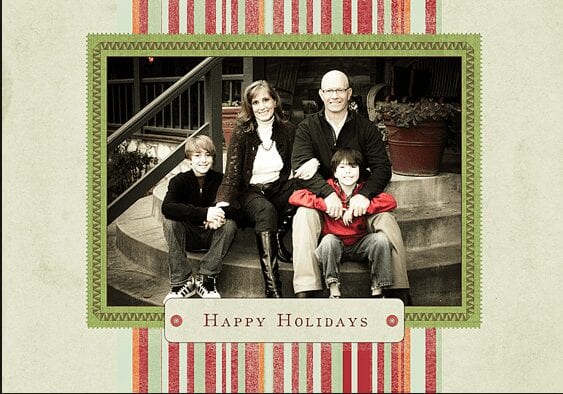 That’s why, a bunch of years ago, I invented my own ritual—the GREATEST FRIGGIN’ HOLIDAY RITUAL EVER!!!!

Here’s how it works:

A. People send me holiday cards featuring photographs of their family members and some generic well wish (Happy Holidays! … Merry New Year! … whatever).

C. The cards are taken down and placed on a shelf for one year.

D. Come the ensuing holiday season, I remove the cards from the shelf, flip the cards over and write notes that makes absolutely no sense, directed to a person who doesn’t know the original sender.

E. I place the card in an envelope and stick it in the mail.

I’m not merely a practitioner—I’m an addict. Like crack or cocaine. I excitedly wait to receive holiday cards, envisioning who’ll receive the re-direct. My kids have gotten into the act, too, wondering which classmates will receive mystery cards from random people. The greatness of this is that it teaches an important life comedic lesson: One doesn’t have to be present to enjoy the punch-line.

For example, my wife’s grandma lives in Florida. She’s lovely and smart and very good to me. Hence, I sent her this card earlier today:

My wife’s grandma doesn’t live on the Bayou. She doesn’t know Katie, Owen or Jericho (a person who doesn’t exist). She doesn’t even own a cat.

My greatest ritual triumph came three years ago. We were at a friend’s house, and his holiday cards were piled on a table. I looked through them, and spotted one of a couple with their dog. “Can I have this?” I said.

That night, I placed the card in an envelope and had someone else write Leah’s address on the envelope. I stuck a stamp, dropped it in the slot—and sorta forgot about it.

One week later, we’re on our annual family ski trip. It’s cold as hell, and I’m miserable. “The weirdest thing happened to me,” she says.

“I got this card in the mail, from Jim and Julie Stanley. I have no idea who these people are. I Googled them, I looked through my contacts. It’s them with a dog. They wrote something about ‘Hope to see me soon …’”

The wife is sitting next to me. She is bursting at the seams. She r-e-a-l-l-y wants to laugh. I nudge her in the ribs.

Eventually, against my will, the wife tells her.

Anyhow, I invite all jeffpearlman.com readers to embrace the holidays and join me in the ritualistic redistribution of cards. Trust me—it’s awesome.