Why I Almost Never Do Book Signings 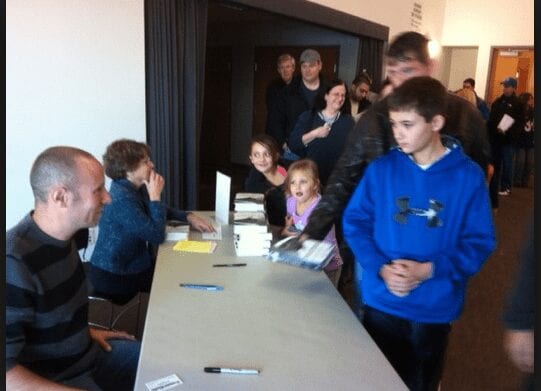 This weekend I’m appearing at the Los Angeles Times Festival of Books on the USC campus. I’ll be on a panel, then signing books. I’m excited, because I love talking writing and being around other authors.

I’m pessimistic, because I hate—hate—signing events.

I know … I know: You’re an author who hates signings? What the hell is wrong with you?

Answer: I’m an author, but I’m not a celebrity author. I’ve had a blessed career, but not a blessed career that brings a line of 200 people to my events. If I’m having an absolutely, positively, 100-percent amazing day, I might (might) get 50 people to attend. But everything has to go right: Hot book, signing in my home town, lots of friends and family members coming. Otherwise, there’s a big risk I’ll go through another Fort Hood ’08-type disaster. Which, in my family, has become the stuff of legend.

Six years ago, when my Cowboys biography was out and selling well, HarperCollins arranged an event at Fort Hood—the nation’s largest military base. I was pretty psyched: the local newspaper interviewed me the day before, and I had this vision of a room filled with soldiers, talking NFL and Cowboys and such. Cool.

I arrive. I’m met by some military guy who says, “We don’t get many celebrities around here!” He leads me to the base’s equivalent of Wal-Mart. Huge store, clothing and toys and such. We get to a front area where, oh, 200 copies of my book are stacked behind a table. “Sit here,” he told me. Then—the announcement: “Ladies and gentlemen, Jeff Pearlman is here signing his new book … Jeff Pearlman is here …”

I sat for, I believe, four hours.

I sold (and signed) four books.

At one point, i ducked beneath the table and called the wife. “This is the most embarrassing situation ever,” I told her. “I’m mortified.”

On the down side, I’ve been scarred. Signings scare me. No, terrify me. In the ensuing years I’ve done a couple at the Mahopac Public Library, my hometown joint. I generally enjoy the experience, because it’s childhood pals inside a building that helped mold my career. And yet, even in the comfort of home, I’ve had people say, “Jeff! Loooong time, no see! How’s the family? Do me a favor and sign a book to me …”