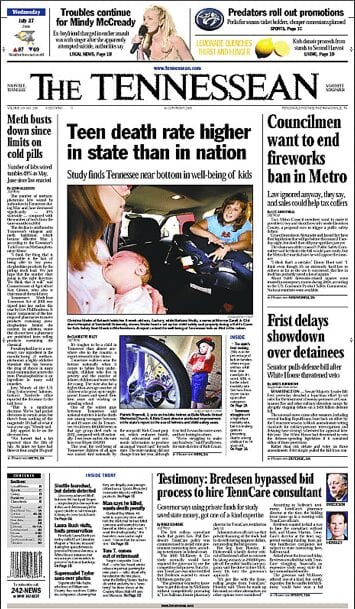 I was thinking about something earlier today, figured I’d share.

Back in the early-to-mid 1990s, when I was starting my career as a features guy at The Tennessean, the newspaper had an excellent film critic named Gene Wyatt. He was an older man, who shuffled around the office and smelled, often, of alcohol. I was told on more than one occasion that Gene was a local newspaper legend who, over time, was overcome by booze. “He’s a drunk,” me editor said. “It’s sad.”

Regardless, I liked Gene. He had a soft soul, and I think he took mild pleasure in my New York-born snark. One day, I saw Gene in the newsroom and asked, innocently, what he thought of Spike Lee, whose “Crooklyn” had recently been released.

“Just another nigger director,” he said before walking off.

I stood there, stunned. Speechless. Disgusted. Gene was an experienced journalist who—pre-film critic years—covered much of the Civil Rights movement. I was a kid. He was locally famous, I was locally, well, no one. Still, I couldn’t just let that slide. I couldn’t. Hence, I wrote Gene an e-mail (I guess this was a tad cowardly. But I was a coward), explaining how offended I was; how I completely disapproved of that word and its usage. Was I nervous? Hell, yes. But I would have felt like a complete tool doing nothing.

One day later, I was approached by an editor, who was furious. “Gene did not use that word!” he said. “I’ve known the man for 30 years, and he would never say such a thing.” He went on and on and on and on, and I sat and listened—knowing the truth. Knowing what had been said.

Gene and I didn’t speak much after that. I’d still see him shuffling through the newsroom, but our dialogues ended. Once I left Nashville in 1996, we never saw one another again.

Ten years ago, when I learned of Gene’s passing, I thought back to the word and that day and the smell of alcohol oozing from his body. I never held anything against the man; never damned him a racist.

But I’m glad I said something.