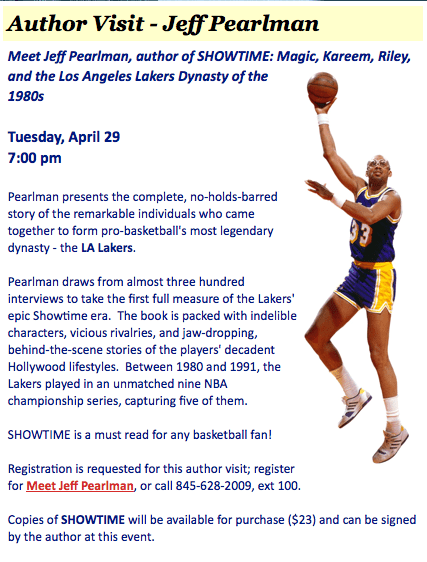 Received an e-mail recently from a librarian at the Mahopac Public Library. She wanted me to give her a call. I did.

“I think we should cancel your event,” she said.

I felt bad for her, because she felt bad for me. Which was weird, because I didn’t feel bad for me. Truth be told, I felt relieved. A. Because I sorta figured zero people would show up to hear me talk about Showtime at my hometown library; B. Speaking in front of zero people isn’t so wonderful. C. I’m not so beloved in Mahopac these days.

This is with understandable reason. A couple of weeks ago, after a rough racial patch in Mahopac (see here for details), I was contacted by a reporter at the Journal-News, the local newspaper. He was doing a piece about Mahopac, and wanted to speak with me. I agreed, but was hesitant. I hadn’t lived in the town since leaving to attend college. That was (egad) 24 years ago. I told the reporter such, and stressed (like, really s-t-r-e-s-s-e-d) that while my boyhood had some rough patches, I couldn’t really speak for Mahopac: 2014. When the story came out, I read and cringed. I wasn’t misquoted, and I didn’t find the article unfair or contrived. It’s just, well, I came off as a pretty big hater. A friend from growing up even told me so—”Why can’t you stop beating on Mahopac?”

She was 100-percent correct. I do beat on Mahopac. Well, the Mahopac of my boyhood. I’m a big nostalgia guy, and much of what I write about concerns being a kid and walking up and down Emerald Lane and Rodak’s Deli and Gary Miller and Dennis Gargano and Jon Powell and the Ballerinis. I’m not one who forgets the past, or lets yesteryear slip away. Hell, just the opposite. I dwell on it. Ponder it. Study it. Analyze it. Sometimes, perhaps, unfairly. Oftentimes, I believe, very fairly.

I digress. As soon as the Journal News piece ran, I knew my library gig would bomb. Not that I’m a big draw to begin with. I mean, I’m just a writer. Not so exciting. But, to me, the story served as a final wedge between me and my hometown. Why, if you live in (and love) Mahopac, would you want to support a guy who so clearly disdains it? Why attend an event that boosts the ego of one of your town’s biggest critics? The irony is, just a few weeks ago I spoke before, oh, 300 people in Los Angeles—an eager, peppy crowd that made my day.

Alas, I’m not from L.A. Or Delaware. Or New Rochelle.

I’m from Mahopac. And I’m sort of an orphan.