The Winner of the NFL Draft: Johnny Manziel’s Nose … 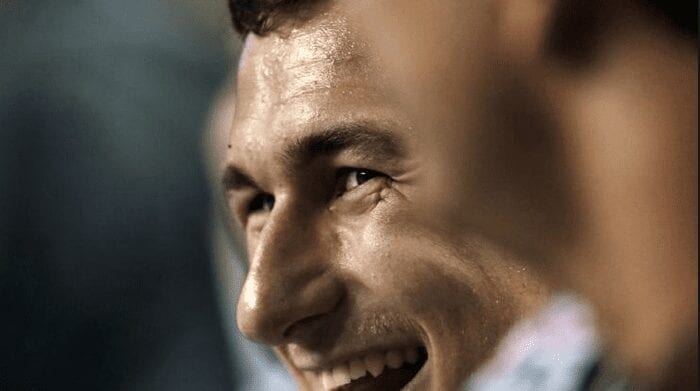 Joel Gunderson is a Portland State graduate and aspiring journalist. Here, he offers his take on the first round of the NFL Draft. You can follow him on Twitter here.

It took 34 seconds for his name to be mentioned, and 283 minutes for it to be called, but Johnny Manziel still dominated the NFL Draft Thursday night, hogging camera time like a Kardashian … while getting about as much accomplished.

After four months of bloated hype, cutthroat analysis, hyperbole and inflated senses of importance, the NFL’s most hyped-night this side of the Super Bowl went off the with the typical fanfare. Vignettes of players in the weight room, on the field and, in Manziel’s case, throwing a ball through a tire in Texas, surrounded by all the glitz and glamour New York City could offer.

It’s ironic, in a sport that demands so much toughness, that its marquee night amounts to not much more than a bedazzled, slightly masqueline catwalk. Since its televised inception in 1981, the draft has moved from side note, to weekend viewing, to its current spot in prime time—and the players have followed suit. It’s $5,000 suits, agents, PR reps and, if they’re lucky, a kiss for mama.

At some point in the night, football highlights were shown. They were few and far between, but made you long for September, when the real action comes to fruition.

With rumors swirling all day (the first official trade Tweet was sent at 12:17 pm, by my watch), the Texans stayed true to form and took the most devastatingly inconsistent specimen in the draft, Jadeveon Clowney. He’ll be scrutinized from the moment he touches down in Houston, but a line featuring him and J.J. Watt? Houston just jumped up in my book.

Oh, and as of this morning, there’s still a Carr brother out there … just saying, Houston.

(It’s worth noting that fourteen minutes into the broadcast, Johnny Manziel or Johnny Football had been mentioned thirteen times. Yes, thirteen. Eight of them occurred before Clowney was picked.)

It’s safe to say ESPN was setting a theme. It’s Johnny’s world, while we are just living in it.

Offensive tackle Greg Robinson went next to St. Louis. The crowd is already taking bathroom breaks. That’s what the Rams do to you.

Literally, you could see people yawning as the pick was being announced.

Fear not, loyal fans of the NFL … A QUARTERBACK WAS SELECTED!! With the third pick, the Jaguars selected Joh… I mean, Blake Bortles?

Oh, boy … should we call him Johnny Rodgers already? Could it be?

Off the Manziel count for a minute (Johnny tracker was at 26, by the way, most of them from John Gruden, who was bedside himself that his favorite Gruden Camp QB was still in the green room), the Buffalo Bills pulled an Atlanta Falcons, trading away picks and assets for a wide receiver who will help them win exactly zero games.

Sammy Watkins, welcome to Buffalo. Don’t buy, just rent. You will be gone in three years.

At this point, the tone has been set for the night. It’s not about who goes where, unless that man is Mr. McDonald’s himself. ESPN gives up trying to sound like they even care about the other players and, coincidentally, so does the viewer.

Khalil Mack, Jake Matthews, Mike Evans all go, yet receive less airtime than Manziel’s nose. Seriously, my HD space is running out trying to focus with that thing. Every pick that is made goes to said player, they cry for a second, then we get a shot of Johnny drinking his bottled water.

Cleveland makes the first, second and third move of the night, eventually landing the No. 8 pick to presumably select …

More picks that no one outside their market will remember, and more shots of Manziel, who is committing a felony on his water bottle.

Finally, the drama hits its crescendo … the Dallas Cowboys are on the clock, and the hometown hero remains ripe for the pickin’.

It’s been speculated for weeks that Dallas could be interested in keeping Manziel in Texas, the eventual replacement for oft-injured Tony Romo. Could the Cowboys really go from one gunslinger to the next, even with so many glaring needs? It’s almost set-up too easily …

No trades, no maneuvering. He just falls in your lap.

The Jets, in perhaps the most shocking move of the night so far, select someone who doesn’t draw the ire of all their drunken fans in attendance. You won’t remember his name. No one will. According to Gruden, he’s got a high motor. So he must not be athletic.

Finally, almost three hours into his personal love fest, Johnny Freaking Football Manziel finds a home. The problem for him is it’s in Cleveland.

Yes, the Browns, in their third trade of the first round, move up to snag the man they have been coveting for … the last 23 minutes, apparently.

Is this for real?

The rest of the round goes off without a hitch; meaning, no one cared until the last pick, when Minnesota finally took Teddy Bridgewater out of his misery.

So, let me get this straight … people feel bad for him, a potential number one pick who is freefalling don draft boards … but now, instead of being stuck in Jacksonville, he gets to hand the ball off to Adrian Peterson? I would argue Teddy B had a better night than expected.

In the end, I stopped counting Manziel’s name at 54 times in the first 20 picks. In their world, ESPN got exactly what they were looking for: three hours of Manziel coverage, all the while making every other player out to be a complete shell of importance.

Did your team improve? Who knows, there’s still five freaking rounds left to figure it out.

The good news for fans, however? Only 70 days until the first 2015 mock draft comes out.