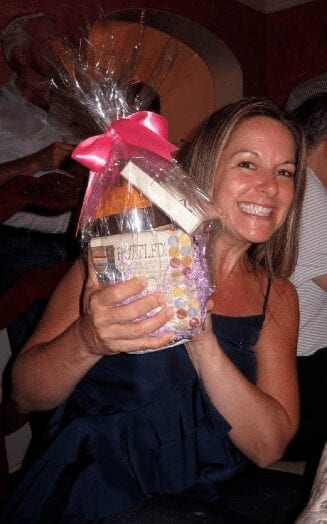 In many parts of the country, people find the 2014 stay-at-home mother to be a perplexing thing.

Why would you stay at home? Don’t you want to work? Aren’t you bored? Do you just play tennis all day? Is Days of Our Lives still on? Blah, blah, blah, blah …

I’ve known Amy forever. We’re both survivors of the mean streets of Mahopac, N.Y.; both attended the same high school; both remain in New York. Her husband, Michael, owns two excellent restaurants—The Rye Grill and Bar in Rye and The Lexington Square Cafe in Mount Kisco. Here, she stands up for her life’s work and explains why picking up the kids beats crunching numbers or making stock trades.

Amy Fabry, welcome to The Quaz …

JEFF PEARLMAN: Amy, you’re a self-anointed, proud stay-at-home mom. Which makes me wonder—what sort of stigma is attached to being in your shoes? Do you still get comments like, “So you don’t work …” and, “Don’t you ever want to do something?”

AMY FABRY: To be honest, I’m sure there are people who think that way but I’ve never had anyone say it to my face. I feel extremely fortunate that I have the choice to stay home. I love being home and being a “housewife.” I have three children—ages 10, 8 and 5. When they were younger it was much harder but it’s so much easier now that they are older. The youngest will start full-day kindergarten in the fall and I will have the entire day to myself which I’ve never had. I think working mothers and fathers have it so much harder than stay-at-home parents (I’m probably going to catch some slack for saying that) but I say to myself on a regular basis, “I don’t’ know how they do it.” The stress of getting everything done (homework, cooking, cleaning, activities, play dates, etc) and working? I raise my glass to them because I would be a basket case.

J.P.: Blunt question: Why not get an away-from home job?

A.F.: I have no desire to work away from home but that is probably because I never had a career. I graduated college with an English degree and, at the time, I was waitressing and making more money than other jobs could offer me. Once I got married I got a job as an executive assistant at a real estate company in New York City. The money was OK but, again, it was by no means a career for me. I knew that once I had children I would stay home. If I had a career that I loved to go back to—maybe? But I am honestly extremely happy and satisfied and fulfilled being home. And I appreciate it—I really try to not complain.  My husband and I joke that our lives would be different if I worked (not necessarily better, but that renovation we’ve wanted for years would come much faster!). But for now—having me home with the kids works for our family. My 8-year old has asked me why can’t he go to the local Boys and Girls Club after school with his friends and I explained that there isn’t a need for it because I’m home. He asked me to go to work 🙂 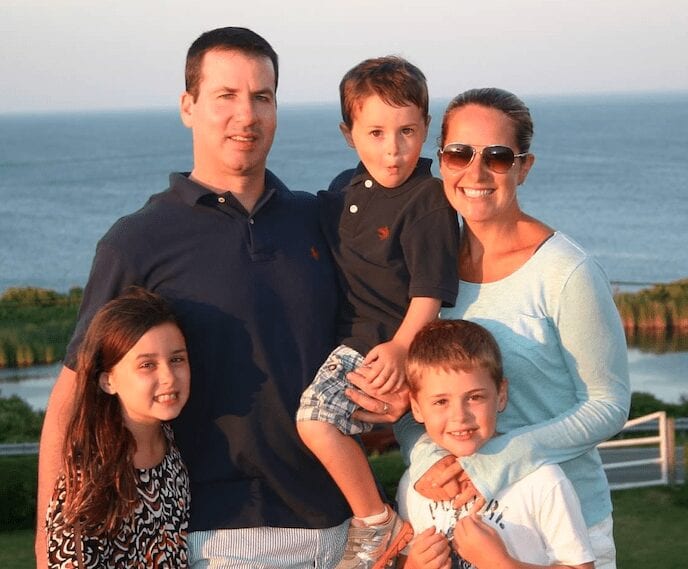 J.P.: I remember when my daughter was born and my mother in law and I got in a heated debate over whether a dad can be as close to his child as the mom … whether he can serve a similar role and meet the same needs. What do you think?

A.F.: I think that is 100 percent up to the dad. I do think a father can be as close to a child as a mother—maybe even closer in some cases. I think it depends on the parent. I joke all of the time that I think my kids would step over my bleeding body to get to their father. I know that they love me and when push comes to shove and someone is hurt or upset—they usually come to me. But I think that’s only because I’m the one who is always around. But I also think that my husband is fully capable of meeting the needs of all three. Maybe not all of the time but I can’t do that either. Sometimes only Mommy will do and sometimes it’s only Daddy.

A.F.: Again, I really try not to complain—I will say that the evening hours of 4 until 7 are ridiculous and stressful but that’s the case in every household with children. Carpooling kids to activities and making dinner and helping with homework that I don’t understand while dealing with cranky, tired kids isn’t fun. If you ask my kids what makes me angrier than anything? All 3 will tell you “fighting, crying and whining.” So any day that has an abundance of those three things is a bad day.

A.F.: Sunday is my favorite day of the week because my husband is home (he works in the restaurant business and has a crazy schedule). He takes the kids in the morning—I get to the gym by myself. We usually have friends or family over for dinner—it’s usually just a chill, do-nothing day—and I love those. No carpooling or homework.

J.P.: I know you grew up in Mahopac, N.Y., know you attended Iona. But what was your path from graduation to here? When did you decide this course? Did you ever come close to becoming a career woman?

A.F.: There were actually a few stops before I graduated Iona. I started at SUNY Cobleskill and from there went to SUNY Oneonta for a semester. When I was asked to “take a semester off” from Oneonta (I basically failed out—my grades were horrible) I moved in with my aunt and uncle in New Rochelle and started at Iona.  I began waitressing to make money and fell into the trap that so many do—the money I was making was great and I worked when I wanted to work and took off when I wanted to take off. I loved the freedom of the lifestyle. When I got married and got tired of it I went into the city and worked there for a few years until I had my first child. I said before—I did take a few graduate classes after Emma was born with the intention of possibly teaching once I was done having kids. But then I had No. 2 and No. 3 and here I am. I have no desire to go back to school for anything.

J.P.: I’m fascinated my the nanny-mom-child triangle. I’ve spoken with many nannies about it, and particularly about the awkwardness that comes when the nanny understands the kids better than the mother. Do you see this a lot? And do you see complications in the relationship.

A.F.: I don’t know anyone personally who has a nanny so I don’t really have an opinion either way. Living in Westchester, though, I see lots of kids with nannies. I can say this—If I did work full time and had the need for a nanny, I would think that I would want someone who loved my children and understood them and cared for them just as I would. I was at a 50th birthday party recently for an old friend of mine who was a nanny for a family when she came over here from England. She started working for them when the children were babies and stayed with them until she had her own children. They’re all grown now and they were at her party—it was very sweet to see how close they still were. It was a very special relationship.

J.P.: Your husband Michael is a restaurateur. I’ve heard 1,001 times that the restaurant business in thankless, hard, awful, endless, etc. True? Not true? And how does his career impact your schedule and role as a mom?

A.F.: He genuinely loves the business—I cannot imagine him doing anything else. Mike and I met at a restaurant when we were in our 20s. He was the manager and I was waitressing. I don’t think our relationship would work if I didn’t understand the business. He owns two places now so he’s busy, but he can make the schedule any way he wants to, so when I need him home during the day or ask him to take a night off for something specific—he can do it. He opened up his second place a few weeks after our third child was born—that was hard. He worked nonstop for a few months straight but we did it. We knew that if we made it through those few months that we could survive anything. 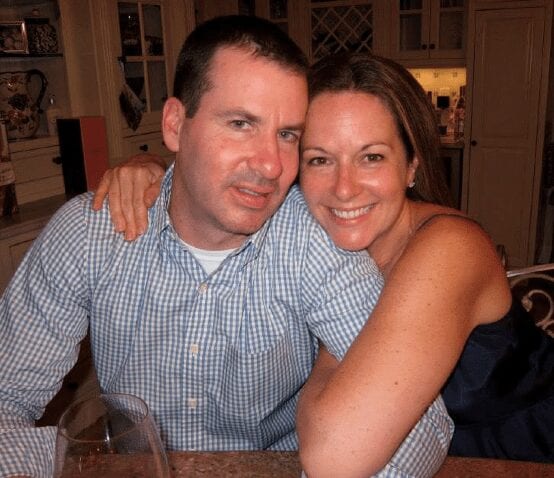 J.P.: I feel like, when we were growing up, our parents trusted the school system. They weren’t always complaining about teachers, second guessing assignments, etc … etc. Has that changed at all? Has it changed in you? And—why?

A.F.: I’ve been really lucky so far in that my kids have had great experiences in school so far. I love our district and they’ve had great teachers. I don’t understand most of the math homework that comes home (for my second and fifth graders) but I trust the system until I have reason not to. I think there is this want to try and protect our kids from everything—especially failure.  I personally think that we should let them make mistakes and screw up and fail, then be there for them to help pick up the pieces. That doesn’t really answer your question, does it?

J.P.: You and I both grew up in Mahopac, N.Y.—which, sadly, has become famous lately for a crazy racial incident involving the basketball team. What’s your take? Do you consider our old hood narrowminded? Is it just a few people? A problem of a larger scale?

A.F.: The whole thing is sad. I was especially heartbroken for Kevin. I think racism is everywhere—in every town. I don’t know what Mahopac is like today but I don’t think it’s fair to judge an entire town on the actions of a few. What those kids did was stupid and narrow-minded. Hopefully, if nothing else it can be the starting point to open up a conversation about racism in the schools. I used it as a conversation starter with my 10-year old about racism and the evils of social media. 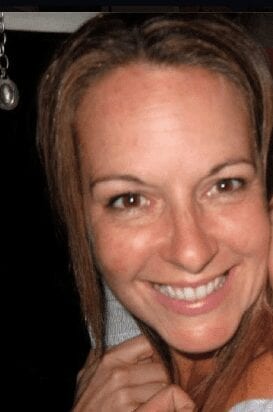 • Celine Dion calls. She offers $50 million for you and the family to move to Las Vegas for a year. You have to work 360 days as her personal dog groomer. You also have to change your name to Corinne Lee and only eat pumpkin-related foods. You in?: Not a chance!

• Ever thought you were about to die in a plane crash? If so, what do you recall?: Never, but I am a nervous flyer now that I’m a parent so my worst fear when flying is not seeing my kids again.

• How did you meet your husband?: The Rye Grill and Bar—he was the manager and I was a waitress. We were great friends—I fell first. It took him some time to feel the same way but he finally came around.

• Three memories from the Mahopac Senior Prom, please: Mitch Jacobs was my date.  We took a party bus to the Jersey Shore afterwards. We saw Billy Joel in concert on our way home.

• If someone offered you the car of your choice in exchange for eating five maggots, would you?: No way! I love my car.

• Was 1980s high school cheerleading a sport or an activity? Why?: LOL—it was totally an activity! Now it’s a sport! Once we graduated they really took it to the next level but we had so much fun!

• One of my children just farted very loudly. Should I laugh or be grossed out?: Always laugh! They’re kids.