I suppose being a celebrity has lots of perks, but I wouldn’t wish it on the kid who stole my lunch money. I’ve covered oodles of famous people through the years, and it’s striking how many are unhappy, lonely, paranoid, isolated.

Put differently: Watch the above video.

Ariana Grande is a former Nickelodeon TV star who now sings. She’s 21-years old, has a big voice, a cute look, a good amount of talent. I don’t know why she was visiting New York, but, well, just watch.

Here’s my question: Who’s the most pathetic of the bunch? Is it …

A. The people who keep bugging her for photos.

B. The guy filming for whatever the hell 247PapsTV is?

I’ve never really understood the whole “I need a photo with you” thing. Like, why? Why do you need a photo with Ariana Grande or Lady Gaga or Derek Jeter? What are you planning on doing with it? Showing it to friends? Posting on Instagram? And … then what? Like, what’s the value? And why is it more valuable than quietly, respectfully approaching someone like Grande and saying, simply, “I love your music.”

As for the guy—um, pathetic. I’m guessing, by voice, he’s in his 30s. And he’s camped outside a hotel, stalking out a barely-adult pop singer. That’s your career? That’s how you make your money? And the fake nonsense dialogue? The pretend interest? Awful. Ugly. Stupid.

PS: My favorite thing—this guy posing with her for a photo. Um … 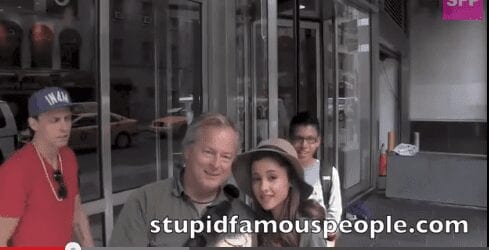 PrevPreviousCongrats. You’ve ended the lives of 298 people who had nothing to do with your stupid cause.
NextJerry AzarNext