In the course of planning our New York-to-California move, I’ve been digging through tons of old folders and cabinets, uncovering stuff I haven’t seen in years. 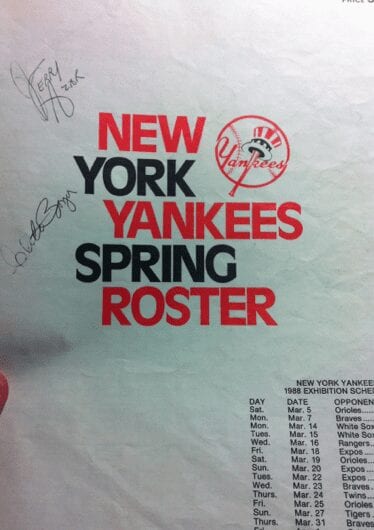 In case you can’t tell, it’s the Yankee roster from spring training, 1988. Back in the day, the Bronx Bombers made their February-March home in Ft. Lauderdale, about 20 minutes from my grandparents’ condominium in Sunrise Lakes. Even though Mollie and Nat couldn’t care less about Oscar Gamble and Brad Arnsberg and Don Baylor and the like, every February—without fail—they’d take me and my brother at Ft. Lauderdale Stadium, where we’d buy the 50-cent roster, then hang over the railing and beg for autographs.

I got some goodies over the years—Billy Martin, Ron Guidry, Scott Bradley, Ed Whitson. My all-time favorite, however, is the one pictures above, in the top left corner. It’s the one … the only Jerry Azar, a longtime New York sportscaster. I don’t remember much from my boyhood, but I vividly recall yelling out, “Mr. Azar! Mr. Azar!” I genuinely considered him a celebrity, even as those around me asked, “Who is that?” Azar approached and—without skipping a beat, as if he did this all the time—jotted down his name. Years later, I actually told him of the experience, and he laughed warmly.

I like to think 15-year-old Jeff Pearlman requesting Jerry Azar’s signature speaks to a kid who knew he wanted to one day enter sports media. Truth be told, I was merely a star-struck punk with a blank roster cover.

Interestingly, Clete Boyer also signed. He was a spring instructor at the time, as well as a two-time World Series champ and former All-Star.

Yet I was—and remain—all about Azar …

PrevPreviousCelebrity Sucks
NextWhy a kid loves a player …Next