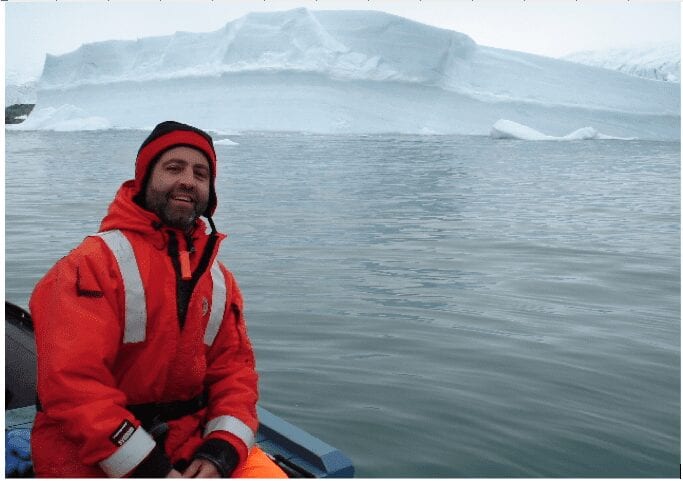 It’s taken me 165 Quazes to finally delve into climate change. Which is sort of strange, in that climate change—and the future of our planet as a sustainable living place—consumes me. Simply put, I want my kid and their kids and their kids to be as happy and comfortable as I am. If the earth is 97 percent water, this seems unlikely.

Hence, today’s guest is Dr. Raymond Najjar, a professor of oceanography at Penn State University who focuses upon the impact of climate change on coastal regions. Here, Dr. Najjar explains his optimism in the face of mounting bad news, as well as his thoughts on what humanity must do to survive and thrive.

Dr. Najjar, welcome to The Quaz …

JEFF PEARLMAN: Dr. Najjar, first question is one I’ve been wanting to ask an expert on climate change for a long time. In short, how are you not curled up in a ball right now, depressed over the seemingly inevitable decline of our planet? I’m sort of being serious—whenever I read about climate change, and another thing melting, another record high temperature, I feel like all’s lost and my kids are (to be blunt) fucked. Am I wrong to feel so hopeless? Do you feel this way?

R.N.: I am optimistic because we have faced imminent environmental catastrophes before and overcome them. The crazy thing is how fast we forget how much progress we have made on a whole slew of environmental problems, such as smog, acid rain, spectacularly polluted rivers and lakes, and the ozone hole, to name a few. How’d we do it? We had good science and people (including politicians) who really cared and were willing to fight against industry and other groups philosophically opposed to regulation of any kind.

What’s remarkable is that in the end we came out on top economically, so even without the ethical arguments—which should be enough to carry the day—it makes sense to clean up the environment. The Clean Air Act is a shining example: we reduced emissions of nitrogen and sulfur oxides, the acidity of rain declined, electricity rates were stable, the economy grew, and we ended up saving money as a result of fewer sick days and hospital visits.

The other thing to keep in mind is how fast public opinion can shift. Take our views on gay marriage, for example. This gives me hope that people want to do the right thing and will ultimately come around if we keep talking and listening to each other.

R.N.: More flooding is going to be the main impact to humans and ecosystems along the coast. Sea level is rising now on average by more than an inch per decade and the rate is increasing. It doesn’t sound like much but by the end of this century we are looking at an additional few feet, which will have a big effect, especially on low-lying areas. Direct effects of warming are also a concern. If we continue the current trend in greenhouse gas emissions, a coastal region like the New York City Tri-State area will experience summers by the end of this century similar to summers now in southern South Carolina. That’s a huge change for people and ecosystems to handle.

J.P.: There are shitloads of people in this country who insist either: A. Climate change has nothing to do with man’s activities; B. Climate change is a liberal hoax. Is there anything you can say to these folks to prove them wrong? Because they seem pretty insistent.

R.N.: I don’t waste my time with the 5 percent on the lunatic fringe. There are others who are genuinely skeptical about the science because the media tends to weigh opposing views evenly and because it challenges their world view (see below); with those, I am patient but persistent, and have seen some minds changed. We all ultimately care about the same thing, which is providing a better future for our children. 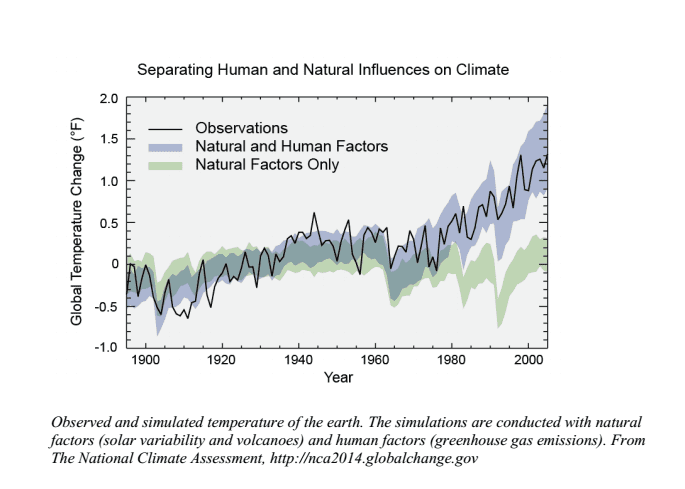 J.P.: You’re a professor of oceanography at Penn State. You have a BE in Mechanical Engineering, an MA and PhD from Princeton. But, womb to now, what has been your path? Where were you born? When did you first find yourself fascinated by oceanography? Why are you here?

R.N.: I was born and grew up in Brooklyn, N.Y. My folks would say I was drawn to the seashore as young boy vacationing on Cape Cod, but I fell into oceanography by accident. In engineering school, I enjoyed classes on fluid mechanics, but I also wanted to save the world so I looked for graduate programs in environmental fluids, which meant meteorology and oceanography. I was a homebody, Princeton was nearby, I made the cut, and the rest fell into place. I worked hard but I also was lucky to find really great people to work with and interesting problems to work on.

R.N.: I love the book “Abundance: The Future Is Better Than You Think,” by Peter Diamandis and Steven Kotler. People are problem solvers. Our ingenuity is breathtaking. We are faced with the wonders of technology and improved lifestyle daily even though we get mostly bad news from the media. Yes, there is a lot of misery in the world, but there is less than there used to be, in part as a result of technological progress and the desire for people to make things better. 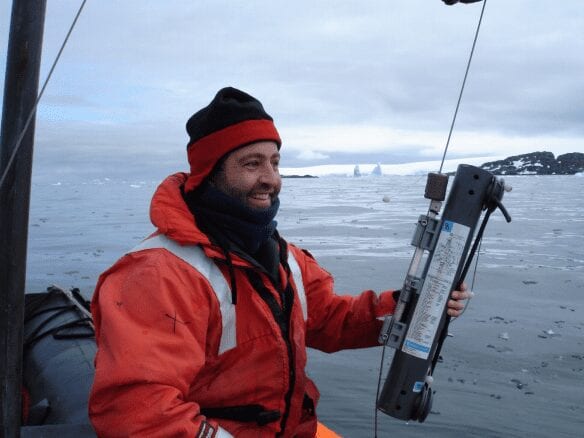 R.N.: It will be hotter and there will be more floods and droughts. It’s going to be rough, particularly for the poor, and we will have to adapt. How much more severe the climate gets depends on much more carbon dioxide we pump into the atmosphere. We are likely to a rise of at least 3 degrees F, but maybe as much as 10 degrees F if we stay on the current path.

J.P.: What is it that we—the average, non-scientific Americans—don’t grasp about carbon dioxide, oxygen, carbon monoxide, carbonyl sulfide and dimethyl sulfide and their roles in the sustainability of the earth?

R.N.: Okay, you plunked that off my web site. I like studying gases in seawater.

Carbon dioxide gets a bad rap. It’s natural and without it the earth would probably be ice-covered. The problem is that we now have too much of a good thing. It’s not only causing the rapid warming we are experiencing but is also responsible for making the oceans more acidic, which has mostly negative ecological consequences.

Oxygen in seawater is important because fish and other fauna need it to breath. One of the big water pollution problems we have is hypoxia (really low oxygen), which is caused by dumping too much sewage and fertilizer into our waterways. Hypoxic regions, also called dead zones, are present throughout many of the world’s developed coasts. We’ve made huge progress on this problem by cleaning up our sewage treatment plants, which has benefitted many estuaries, including the Delaware Bay and Hudson River. We still need to reduce the amount of agricultural fertilizers getting into our natural waters so we can eliminate other dead zones, like those in the Chesapeake Bay and the Gulf of Mexico.

Dimethyl sulfide is cool because that’s what you smell when you are getting a breeze off the ocean. It’s made in seawater by phytoplankton, gets released into the air, and forms particles that cloud droplets grow on. So, in pristine areas of the ocean, phytoplankton may regulate cloudiness.

Carbon monoxide and carbonyl sulfide are quite esoteric. I don’t think we fully understand their function in seawater and the rest of the earth system, but we study them because they are there! 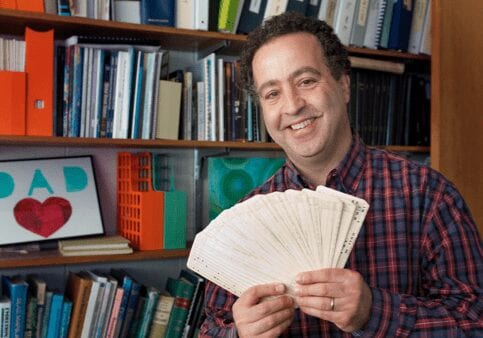 J.P.: I’m almost certainly not as intelligent as you, yet I often think to myself, “Jesus Christ, we are so fucking stupid. We have this problem, but—because it’s not 100-percent, black-and-white right in front of us, we do nothing.” Has your work in climate change at all impacted your opinion on the intellect of America?

R.N.: I don’t like the way you started off your question. I’ll grant you that my scientific intelligence is higher than yours but there are so many types of intelligence (artistic, emotional, social, literary, etc.) that a simple ranking is not tenable. Anyhow, it’s a good question and what I have learned so very clearly over the last few years is how much an individual’s world view colors their interpretation of the facts. It’s really disheartening and somewhat puzzling that, for example, Republicans and Democrats can look at the same data on just about anything and come to vastly different conclusions. What’s even more remarkable is that the more educated those two groups are, the more their views diverge. So it’s like the “smarter” we are, the more we are able to find arguments to fit our world view. It’s depressing and not obvious on how one deals with this.

J.P.: I feel helpless. I drive a Prius, I try and unplug things, etc … etc. But, honestly, is there anything I can do to impact climate change? People like to say, “One person can make a difference …” but I’m really starting to not believe it.

R.N.: Global warming is a tougher problem than most environmental problems because it is truly a global problem. Because carbon dioxide lasts so long in the atmosphere, it doesn’t matter where it is emitted from. So everybody—the whole world, not just those in your community, state, or country—has to be on board with emissions reductions for them to be effective. This is the really tough aspect of the problem. But the ozone hole was similar (because chlorofluorcarbons last long in the atmosphere, too), so I think we can do it. But everyone has to do their share, which is what you are doing by being more thoughtful about your energy usage, and it’s what Obama and the EPA are proposing by curbing emissions from power plants.

J.P.: A lot of climate change doubters I know say the warming of the earth is cyclical, and this is merely another cycle. Any truth to that idea?

R.N.: No. While there are natural cycles, like the ice ages coming and going, we can’t explain the current warming based on them. In fact, if anything, we would be going through a cooling period right now if it weren’t for increases in greenhouse gases. Prior to 1800, we were on a long-term cooling trend for thousands of years, but as soon as carbon dioxide started to rise due to industrialization and forest clearing, the earth began to warm. The amount of warming that’s occurred since then is about what we expect from the amount of carbon dioxide released. 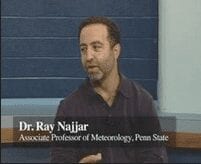 • Joe Paterno statue—should it have remained on campus, or was the school right to remove?: I don’t know. Good arguments either way. Joe said it best: I wish I had done more.

• What happens when we die?: We go to live on another planet as an alien life form. In this way, two great mysteries are solved at once when we die: The question you asked and “Are we alone?”

• Sean Hannity calls. He wants you to appear on his show to debate climate change. You in?: No—there’s nothing to debate. Would be happy to answer his questions, however.

• Three memories from your first date?: I can’t even remember who my first date was with, never mind what happened on it.

• If someone said you can put an end to climate change right now, but you’d have to take off 20 years from the end of your life, would you do so?: Yes, if it was done in some benign way. There are some crazy geoengineering solutions that I would not be in favor of.

• One question you would ask Huey Lewis were he here right now?: I love that chromatic horn line during the outro of “The Heart of Rock and Roll.” How did you come up with it?