I am a Wahoo 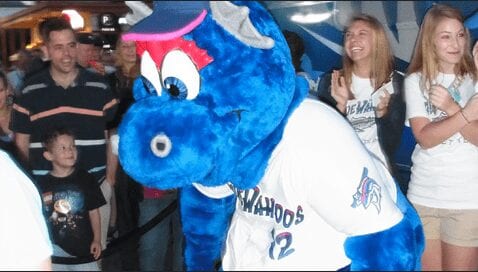 Ashley Kummer is a student at Pace High School in Pace, Florida. Here, she writes about one of the coolest summer jobs a 17-yearold could have. You can follow Ashley on Twitter here and visit her new website here. 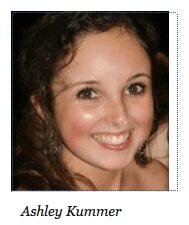 Over the course of the current baseball season, I have learned to love the minor leagues thanks to my wonderful job with the Pensacola Blue Wahoos, Double A affiliate of the Cincinnati Reds.

I work as a member of the Flight Squad (the on-field entertainment during the games), and a bit in the production side (filming games in the dugout and hanging around in the press box, soaking up as much information as I can retain), too. Wanting to go into sports media, I have been beyond blessed to have had this opportunity. Going from attending games with friends for the fun of it, to working behind the scenes at the games are two totally different worlds. Few people actually realize all the work that goes into making sure the baseball games run smoothly each night.

When you really look at the building blocks of producing a baseball game, it comes down—first and foremost—to scheduling. Knowing where you need to be when, what you need to have with you, who you need to have you. In baseball, it’s all about time, anticipation and being quick on your feet. Three outs will go by quicker than you think.  For the on-field entertainment for the Wahoos, we have games in between innings while the players are warming up on the field. With having only a little over thirty seconds in between innings, you have to make sure you have your contestants, props for the game, and prizes ready to go out on the field as the third out is made to end the inning. If not everyone is paying attention, it causes a delay in time. This could arouse angry players, managers and coaches … not to mention the fans that came out to actually watch baseball. The fans can get pretty pissy when they aren’t happy.

What can you take from that? Be on time. Always. So everyone can remain happy.

We play a plethora of games on the field, ranging from dizzy bat races to sumo wrestling in funky smelling sumo suits. One big game that can get pretty hectic for us is the Roach Run. Herding a flock of blood-thirsty kids across the outfield hungry for one of the Flight Squad members dressed as a pesky cockroach is no easy task (especially when I’m a 4-foot-10-inch 17-yearold trying to quickly move along the 8-year olds who generally tower over me). Not to mention the trail of ball caps, flips flops, sunglasses and tears (from the toddlers who aren’t fully aware of what’s going on) left behind on the field for Flight Squad members to scoop up in their nightly run behind the children so the ball game can resume. Thankfully, I’ve only had to get into the roach suit once this season.

Not only does the Flight Squad play games in between innings, we even get to show off our sick dance moves on the dugout tops. This sounds horrific, right? After I get over the fact that it seems like the whole world is staring at me, I just have to remind myself that they’re laughing with me at my amazing dance steps, not at me. If you ever find yourself at an event of any kind and you’re instructed to dance, just dance. It makes it a lot less awkward.

Who am I kidding, though? I love my job so much. It can be stressful at times, but in the long run, it is so worth it. I’m able to meet new people, build relationships with the season ticket holders, my co-workers and even the players. With less than 20 games left, I don’t know what I’ll do with myself when the season ends.

Seriously, what is life outside the ballpark? 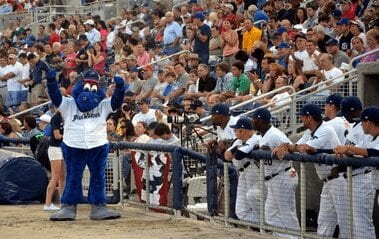