God Knows What Sex Feels Like. And New York in Alma, Arkansas 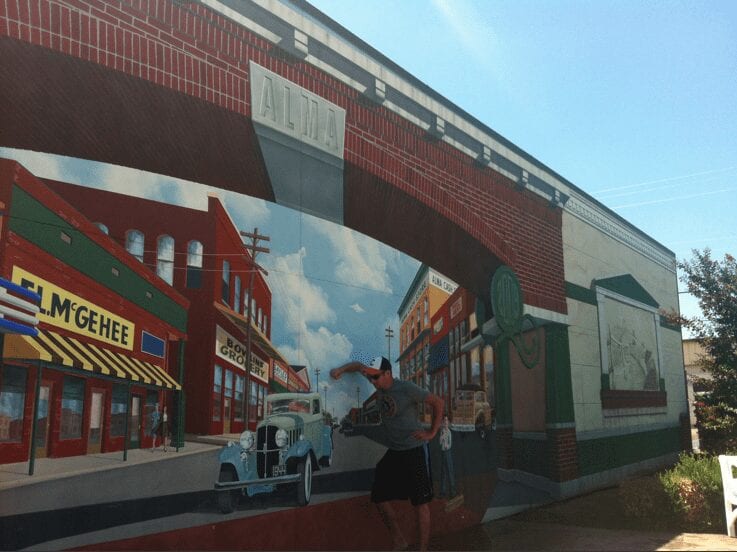 Long, exhausting, amazing, tough day of travels as the terrific Robyn Furman and I continue our trek from New York to California.

We woke up in Little Rock, Arkansas and headed west. And west and west and west. I’m a huge fan of purchasing T-shirts from obscure colleges 98 percent of Americans (myself included) have never heard of. So when we saw the roadside sign—UNIVERSITY OF THE OZARKS—I turned to Robyn and said, “How about it?”

The Presbyterian-based school is located in Clarksville, Arkansas, a middle-of-nowhere outpost with a downtown that makes Newark, Delaware seem downright Vegas-ish. There were myriad closed storefronts, alongside—among other things—a shoe shop, a small restaurant, a barbershop. But, sort of to our surprise, the Ozarks campus was sprawling and lovely. We entered the student center, followed some steps down into the book shop and—BAM!—shirts aplenty! And hats! And mugs! Best of all, we met Rebecca Autumn Phillips, a book store clerk and author of her own self-published book, “God Knows What Sex Feels Like.” In the name of supporting fellow writers, I bought a copy for 10 bucks.

Becca told us she’s an aspiring clergy member as well as an aspiring scribe. The introduction to her book begins with: Welcome to life. Things have been hard for you. Your everyday projects are getting harder and harder to accomplish. You try to set high goals for yourself, but you ‘fail’ daily. ‘Am I really a Christian?’ It’s a question that you ask yourself day in and out. You know some scripture, go to church, pray once or twice a day, donate to a charity and maybe teach a Bible study, but you still don’t feel good enough. Your friends tell you that you can never be too messed up for God and you know they are right, but you still don’t want to believe it. How can you call yourself a Christian when you don’t believe the one thing that glues your faith together?

I’m an agnostic 42-year-old Jew who has never asked, “Am I a real Christian?” But you know what Becca’s intro is? Damn friggin’ good. Direct, concise, clear. It’d be excellent for any writer—but brilliant for a 21-year old. Love discovering stuff like that.

I digress. We left the Ozarks—T-shirts in hand—and checked RoadsideAmerica (the best app ever) for interesting stops between Clarksville and Oklahoma City. In a weird development, the town of Alma, Arkansas popped up. Why? Because it’s home to both a Popeye statue and the grave of a police officer murdered by Bonnie and Clyde. So we went there. And, indeed, there was a Popeye statue. And a plaque dedicated to the cop murdered by, ahem, Clyde’s brother. But as we walked around, we discovered something amazing … dazzling … too good to be true. 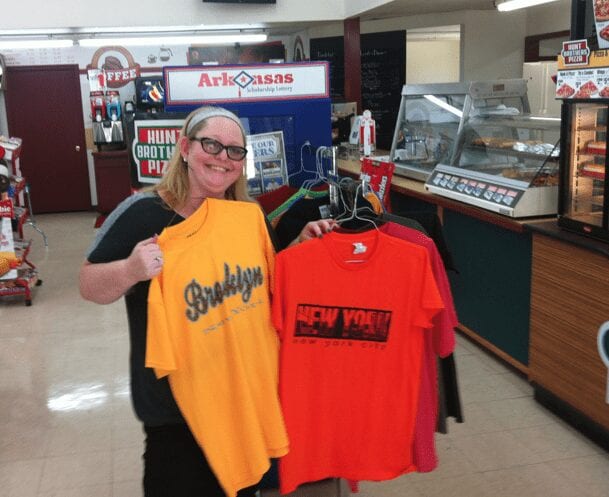 There was a mini-mart in the center of town. We needed to pee. Inside the mini-mart were T-shirts. We wanted items that read ALMA. Every T-shirt in the store said either BROOKLYN or NEW YORK. Um … what? Turns out the two guys who own the place recently relocated to Alma from New Jersey. They thought it’d be cool to sell New York T-shirts—an awful idea, judging by a rack overflowing with items. Yet Furman, funny in the way I like, bought a $10 NEW YORK CITY cap that would have cost, oh, $4 in Times Square (the owners, hearing our story, kindly charged her $8). The men were funny—from India, told us they were the only two folks of color anywhere around; said there were, oh, zero Jews in Alma.

Save for those visiting.

Now it’s 12:44 in the morning, and we’ve plopped down in a La Quinta Inn in Amarillo, Texas. There are far too many hairs on the dark carpet, the wall is the color of blood and Furman is pissed because I took my picture on her iPad, saved it as the wallpaper—and now she can’t switch it back.