It’s 8:02 am in Amarillo, Texas, and I feel like a very large org with spikes in his fist just punched me in the skull.

I almost always sleep in the same shorts, and sometimes—on particularly special days—I wear them, too. They’re actually the most comfortable item of clothing I’ve ever owned. Adidas. Size XXL. White with purple trim. Especially baggy. They’re being worn as I write this.

And the wife hates them.

Admittedly, they’re stained. Everywhere. Dirt, grime, spots of mystery liquid No. 24. But I love, love, love them. Our dialogue goes something like this:

The wife: How can you wear those?

The Jeff: I love them.

Anyhow, they’re my answer to Linus’ security blanket, and I’ll throw them out the day Israel and Palestine makes peace. Which, of course, I’m strongly rooting for. But I really don’t wanna chuck the shorts. 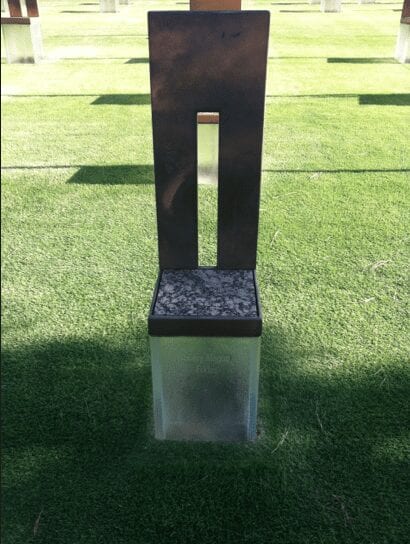 Side thought: In our continued drive across America, Robyn Furman and I stopped at the memorial for the Oklahoma City bombing of 1995. Very haunting and sad. And, interestingly, technology makes the experience even sadder.

For example: There is a chair for every person who died. They come in two sizes—larger chairs for adults who passed, smaller ones for kids. The above chair honors someone named Ashley Megan Eckles. Without technology, you know she was a child, and that’s that. Then—a Google search. It turns out Ashley was 4. She had gone with her grandma and grandpa, Luther and LaRue Treanor, to the Social Security office on the ground floor of the Murrah building. Luther had a 9:15 a.m. appointment at the Social Security office to talk retirement. The three entered the facility. The bomb went off. They died.

Ashley would now be 23 had she lived.