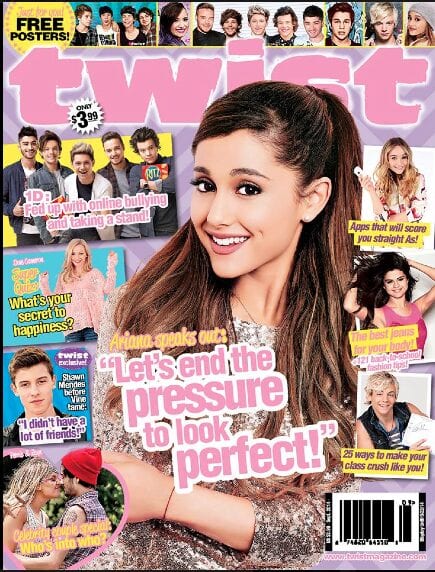 My daughter Casey is 11.

A few years ago she started reading annoying magazines like Bob and Seventeen. They’re all over her room, tattered, torn, ripped, faded, and I’ve come to enjoy our nighttime ritual of lying in bed, skimming through the pages. It’s actually oddly educational, in that—as a 42-year-old geezer—I’d otherwise know little about the exploits of amazing talents like Bella Thorne and Demi Lovato and the five or six guys who make up One Direction.

A few days back Casey was reading the new issue of something called Twist—featuring the singer/actress Ariana Grande on the cover. Over the course of the past year, I’ve seen, oh, 500 images of Grande, who seems to take at least 25 percent of the space in most teen magazines. She’s a pretty kid—young, perky, photographic—with a surprisingly big voice.

And, on her cheek, she has a brown beauty mark.

Why do I know this? Two reasons. One, because (as I just noted) I’ve seen tons of her pictures. Two, because the daughter and I once had a debate over whether Grande’s face featured a beauty mark or a dimple. Answer: Beauty mark.

With no trace of irony or audacity, the new Twist cover displays Grande alongside the words, “LET’S END THE PRESSURE TO LOOK PERFECT!” Which is, well, quite funny, considering the photo of Grande is heavily, heavily, heavily airbrushed, to the point where she has but a meticulously smooth-and-unblemished beige cheek. Why, when one looks closer, he/she notices that every … single … image has been airbrushed to perfection, to the point that a reader must come to one of two conclusions:

1. Twist doctors all its photographs.

Is this a huge deal? Probably not. But the message irks me. People are visually imperfect—and those imperfections are (in many ways) what makes us interesting, unique, different, appealing. Ariana Grande isn’t less attractive with a brown beauty mark on her cheek.