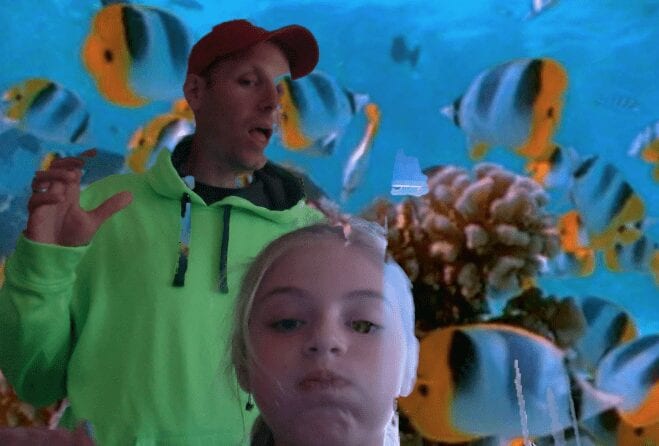 We decided to go to Dana Point this morning and rent a paddle board and a kayak.

That, however, was a long time ago. Now I’m a Californian! I’m home! I can do this!

The wife started off on the kayak with our son Emmett. I started with the paddle board and our daughter, Casey. They went one way, we went the other. Our launch point was Doheny State Beach, and we would ultimately meet wife and son at Baby Beach. Wait, here’s a map …

Casey and I pushed off into the Pacific Ocean, excited, exhilarated, enthused. And, eh, clueless. I tried standing on the board—plop! Into the ocean. Tried again—plop! Casey stood, started paddling. We moved, oh, three feet. But, alas, we had to make it to Baby Beach. What to do … what to do … what to do …

I told Casey to sit on the board and paddle. I went behind it and started swimming. One hand held the board, the other dangled. I kicked and kicked and kicked and kicked. A life guard boat motioned our way, checking to make certain we were OK.  I flashed a weary thumbs up. Pride talking. At one point, I reached for my water bottle—gone into the ocean. My $20 bill also floated away. But I kept kicking and kicking and kicking. I’m a crap swimmer. We didn’t move so fast or far. I was exhausted. Casey was exhausted. It was probably 100 degrees out, the sun beating down. To our right there was a rock wall, probably 200 yards away. I told Casey we should get to the wall, climb up and walk to Baby Beach. She thought it was an awful idea. I am, however, the father.

“These rocks end in the water,” she said. “They’re not connected to anything.” (If you look at the map, we were on the tiny white stick jetting off of the road alongside a picnic table icon (the name is too small for me to make out, but it begins with a P).

I was furious. And upset. Casey started to cry—which woke me up a bit. “It’s not a big deal,” I said. “We’ll bring it back in on the other side and paddle to the opposite shore [on Dana Drive].” So, carefully again, I dragged the board down the rocks, into the water. Casey sat on top, I kicked from the back and we made it, oh, 400 yards across. A man spotted us. He was fishing. His name was Steve, and he had a fish tattoo on his shoulder. “You need help?” he said.

“Well … can you help my daughter?”

He grabbed Casey’s hand and helped her up the rocks. Then assisted me with the board. I told him we were gonna walk to Baby Beach and …

“You’re not walking to Baby Beach,” he said.

Steve loaded us in his truck and kindly drove us to the beach—where nobody was to be found. No wife. No son. We had no money, no water, no phone, no shoes. We were at a beach, but completely lost. I asked someone whether I could use their cell to call the wife—nobody answered. I used another woman’s phone to call the paddle board place for a pick up. “I’m sorry, sir,” she said, “we don’t pick up from Baby Beach. You have to get it back yourself.”

I felt like collapsing. A three-mile walk, barefooted, carrying a paddle board and oar? With dead legs? “You must be kidding me … you must be—”

“Do you need a ride?” the woman asked.

She summoned a man named Nick. He’s a local contractor who was helping do some work near Baby Beach. Nick was a warm man who smelled of cigarettes. “I’ll be happy to help,” he said, smiling. I began to pick up the paddle board. He looked at me, funny-like. “You’re carrying that board like a monkey trying to fuck a football,” Nick said—a line so amazingly fantastic I’ll certainly use it myself.

He proceeded to tell me a board goes atop a head. I tried it. He was right. Nick drove us back in a truck he bought used for $4,400. It once belonged to a fire company, and the front passenger seat slid back and forth like an amusement ride. Nick is my new hero—along with Steve.

We got back. I told the wife the story, and she (rightly) laughed.

I have the balance of a one-legged drunkard. I suck at swimming. I climbed rock walls with a paddle board. I made my daughter cry. I cursed repeatedly.

It was a miserable experience.

One I wouldn’t trade for $1 million.