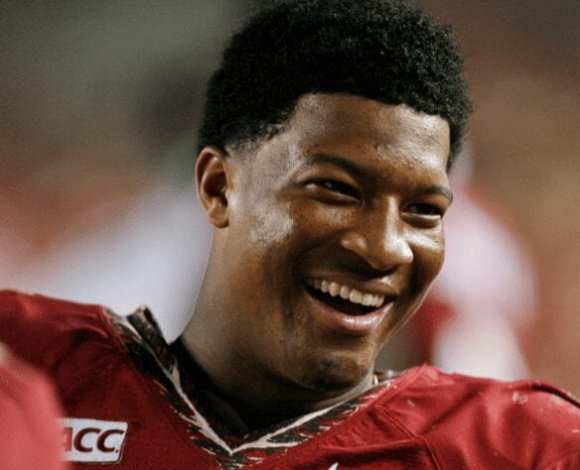 Just to be clear.

This is the face. The name. The man.

I’m merely guessing here, but long ago, when schools like Florida State were first and foremost about (gasp!) education, the idea of plastering this fool’s mug everywhere would be akin to treason. Florida State, after all, has produced myriad intellectuals whose abilities far surpassed the throwing of a tight spiral. Eric Baron, the former director for the National Center for Atmospheric Research, was a Seminole. So was Winston Scott, a NASA astronaut. Screenwriter Alan Ball, poet John Bensko, actors Faye Dunaway and Burt Reynolds, singer Rita Coolidge, William D. Clay, the United Nations adviser, Senators Kay Hagan and Mel Martinez, Governor Charlie Crist. On and on and on and on. Hell, Florida State has brought forth five Rhodes Scholars.

But, really, who gives a crap? Who cares about integrity and accountability, especially when the football program makes millions upon millions of dollars, and Jameis Winston jerseys (OK, NCAA, OK. No. 5 Florida State jerseys) sell for $100 a pop? Who cares about the reputation of a school that turned a blind eye to the rape allegations against said football player; who shrugged when said football player allegedly shoplifted crab legs (dude, if you’re gonna shoplift, make it lobster) from a supermarket; who reacted to said quarterback’s latest imbecilic move by suspending him for half the football season and …

Wait. Wait. Time out. Florida State actually suspending said quarterback for half the football season? That seems pretty reasonable, considering the rape allegation and the shoplifting and, now, the unique and special act of standing up on a table near the Student Union and screaming “Fuck her right in the pussy!” (explanation: here). That’s actually impressive; a school and its football program taking a stand for decency and … and …

Winston was suspended for half the upcoming Clemson game. That’s it. That’s all. Why? Because, in the modern, Sports-Trump-Absolutely-Everything era of society, this kind of thing symbolized courage and strength. Benching a quarterback for half a game. Half a game.

You know what the lesson of the past few weeks has been? Of Ray Rice and Adrian Peterson and Jonathan Dwyer and Greg Hardy and Jameis Winston? Answer: That, in sports, righteousness means shit. Yeah, action will be taken. But not in the name of righteousness. No, we’ll take action as a response to public pressure; as a response to an uproar, a fear of lost advertising, a fear of backlash. The Ravens and NFL had no interest in dealing with Rice—until both entities saw how nothingness would lead to the worst PR hit in the league’s history. The same went for the Vikings with Peterson, the Panthers with Hardy, Florida State with Winston. Nothing ever gets done because it’s the correct step to take. No, things only happen when those in power see the chance of said power slipping away; of dollars drying up in the heat.

Florida State proudly puts Jameis Winston out front, because the school sees him as a big fat dollar sign. The school barely flinched when it came to the rape allegations, and desperately wants his other transgressions and misdeeds to fade to the back.

That way, he can continue to throw tight spirals and sell $100 jerseys.

That way, the Seminoles win.

2 replies on “This is the face of Florida State University”

Off topic: still interested to hear your take on the latest war, courtesy of the Nobel Peace Prize-winning POTUS. And a fun exercise as your share your opinion: pretend POTUS instead has an (R) next to his name.

Agree. But not for nothing: Burt Reynolds was, after all, primarily a football player while at Free Shoes U. And one of those 5 Rhodes Scholarships was awarded to, you guessed it, an FSU football player, Myron Rolle. But to be fair, that he dared risk missing all or part of a pivotal game against Maryland to interview for the Rhodes, was met with derision and outrage by the FSU faithful.