Ranking the NFL Quarterback Trios of the Past 30 Years 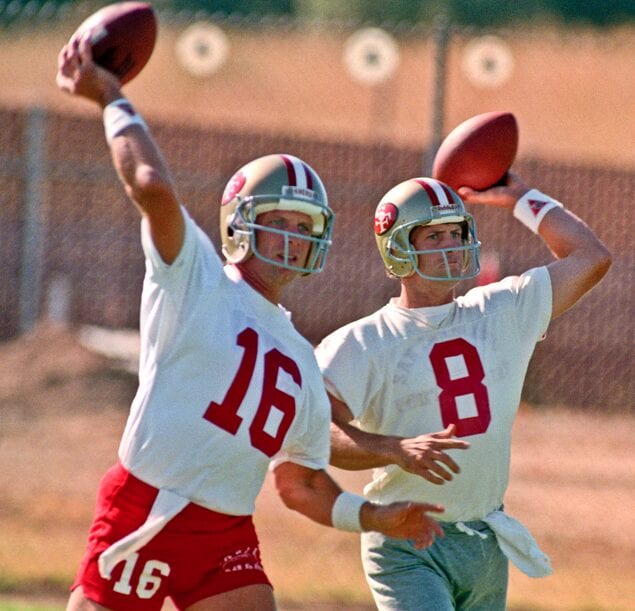 So yesterday afternoon, while driving across the state of Tennessee, I started wondering if the New York Jets had the worst quarterbacks of all time. I started toying with the idea in my mind, then breaking it down, team by team. Then breaking it down again. And again. I decided to ponder only players I’d seen. Which led me to the past 30 years.

Thoughts: One could argue for Colin Kaepernick over Garcia, but one would be wrong. Montana and Young are Hall of Famers. Easy choices for 1 and 2. Garcia was fantastic.

Thoughts: Like the Niners, the Packers feature two Hall of Fame-worthy QBs. Majkowski was great for a season, OK for a couple—then vanished. He’s no Garcia. Hence, the runner-up status.

Also two Hall of Famers. But Manning is only a short-term Bronco, and Plummer could drive one to drink. Still, the Broncos are closer to the 49ers and Packers than they are the Colts.

Easy to forget that Harbaugh was awfully good in Indy, and probably deserves to be ahead of Luck—who oozes phenomenal.

Would have never thought the Titoilers would rank so high, but Moon was phenomenal, McNair was terrific and Chandler was very good. Strong stuff.

I’ve never much cared for Collins—but he did take the Giants to a Super Bowl. Manning and Simms are awfully good.

Brady is obviously all-time elite, and Bledsoe had a Simms-esque career. But the dropoff is a plummet. I picked Millen, but could have gone with myriad so-so nobodies.

The Bengals are surprising. All three quarterbacks are very good, none all-time fantastic. I almost put them above the Pats, but the Brady factor was too much.

I almost put the Chargers in the Top 5, because I thought Rivers, Fouts and Drew Brees was an amazing trio. But by the mid-1980s Fouts was a shell, and Brees was merely good with the Chargers. So, hey.

Aikman was terrific, Romo is maddening, Pelluer is Gary Hogeboom without the talent.

I could see people thinking the Saints are too low. Brees is gonna end up in the Hall, Hebert led a revival and Brooks had spectacular moments. Alas, moments are fleeting. And Hebert seems better in hindsight.

When I was growing up, there was still a stigma about black quarterbacks. That was really dumb. All three of these guys could play, though Vick could drive to drink.

Could be a tad higher. Warner was brief but magical, Everett was very good and Bulger was probably propped by great receivers. Still, not a bad trio.

Man, Lomax was really, really, really good—especially with Roy Green going deep and O.J. Anderson lined up behind him. Plummer was erratic, and Warner was fleeting.

I thought the Jets would rank last. Then I thought about it. Like Lomax, O’Brien was a helluva quarterback, and Pennington and Boomer both could play. Not bad.

Green was a solid NFL starter, Montana’s Kansas City time was brief and DeBerg—one of my boyhood favorites—can make a man celebrate and hang himself on a single play.

I wasn’t going to rank Wilson the best of the three, but … he pretty much is. Krieg had some awesome years throwing to Steve Largent and Brian Blades, and Hasselbeck was better than sold.

I like Matt Ryan a lot, but he shouldn’t be your team’s best all-time quarterback. Vick was wild and erratic in Atlanta. But also electric.

A big, fat meh. Culpepper was the future of the NFL for about six weeks.

Kosar was fun to watch—all angles and awkward slings. Vinny started to find himself in Cleveland. Couch was a waste.

You’d think the Steelers would be higher. Big Ben is elite. Kordell was more flash than substance. O’Donnell was a system quarterback. He was exposed with the Jets.

The Panthers have only 20 years, but they’re repped pretty well. Cam is a star. Underrated, yes. But a star. Delhomme was entertaining and did nice things with Steve Smith. Beuerlein beats out Kerry Collins solely because he didn’t use the n-word.

Another enormous dropoff. I actually think Kelly is a bit overrated. He’s not Elway or Marino. Closer to an Esiason-O’Brien. Fitzpatrick is OK, Flutie was fun and novel.

I know the Packers didn’t need Brunnell, but they got nothing for an excellent quarterback. I liked Garrard a lot, until he started stinking.

Any grouping that includes Joey Harrington is a flawed grouping. Peete was better than you think.

Not a good list. McMahon was over-hyped. Good player, little more. Cutler is still something of a baby. Harbaugh was better as a Colt, but still edged out Rex Grossman.

Just brutal. There are some trios Flacco doesn’t even crack. He’s a solid NFL quarterback who, despite his Delaware pedigree, is painfully overpaid.

Just how bad is this? I almost included Heath Shuler.

A train wreck of quarterbacking. Schaub was very good for a handful of seasons. And that’s that.

It’s amazing. It really is. Johnson was a game manager who won a Super Bowl. Nothing but love for him. But Dilfer was b-r-u-t-a-l, and Freeman a flash in the pan.