College and the Dead American Dream. By Catherine Pearlman 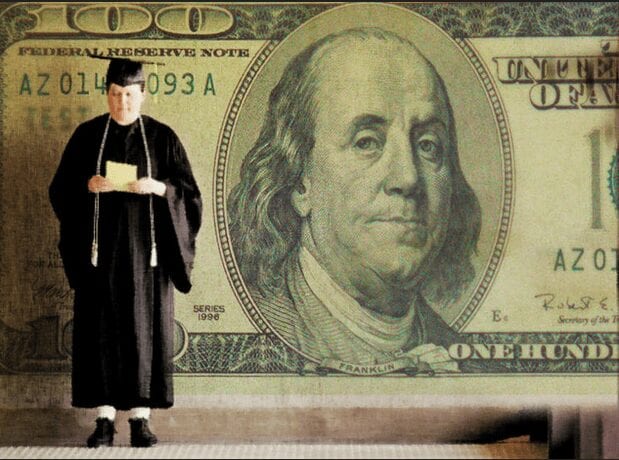 Catherine Pearlman is an assistant professor at Brandman University, founder of The Family Coach and (lucky for me!) my wife. Here, she writes on the damning impact out-of-control college costs have on the lives of low-income, minority and first-generation students and their families. You can follow her on Twitter here.

Over the last half of a century the American job market has become more specialized, usually requiring at least a bachelor’s degree. The message to young people of any color or socioeconomic status is clear: If you want a good job, go to college.

Yet for many students, following this path will ultimately ruin their lives. Yes, that sounds dramatic. It also happens to be true. The word “ruin” is no exaggeration. It’s dead-on.

Countless disadvantaged, low-income, first-generation college students begin university life with the American Dream in mind. The plan is to study hard, graduate, land a plumb job, and help their families rise out of poverty. But, thanks to crippling debt and myriad other impediments, that dream is rarely realized.

The continued demise of Corinthian Colleges, the Santa Ana-based company, sheds light on the predatory practice of many for-profit colleges. Yet, many people maintain a glowing image of college in their minds—fascinating classes, fun social lives, football games, and frat parties. But as a college professor here is what I typically see. Students scramble for money before the start of each semester. They tend to borrow from multiple lenders—oftentimes with appalling terms. By the time the funds are secured the semester may have already started. Some students are forced to take the semester off or they begin after missing the first few weeks of class. Either way, they fall behind.

Part-time or even full-time work is a must because loans can’t possibly cover housing, books and food. Oh, and low-income students also tend to have familial responsibilities (caring for younger siblings, children of their own, or elderly grandparents). Back when I taught in a college where all of the students were first generation one of my students shared a car with her working mother. This young woman attended school all morning, then worked an internship all afternoon then returned home to help take care of the housework. After doing some part-time paid work, the student drove to pick her mother up from her job at 1 am. This happened every day. When did she have time to study? I have no idea.

For students like this, poor grades and failing a course become the norm. Retaking the class just adds to the overall loan total. Many times the financial burden takes its toll and the exasperated student drops out.

Think maybe my students are somehow different than poor minority students around the country? Well, I can prove they aren’t. 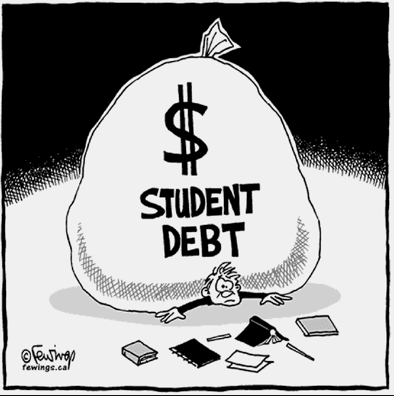 If students attend college but do not graduate, they rack up the loans but never get the job market benefit of having the degree.  Even when they graduate, minorities are also more likely to be unemployed after graduation or be in a lower paying job than their white counterparts.

And here is the crux of the problem: Low-income, minority and first-generation students are racking up colossal debts that they may never be able to pay back. Nothing—not even filing for bankruptcy—will eliminate college loans. Furthermore, these students also tend to take out more money in loans. Failed classes, more required remedial courses and the lack of family resources all raise the cost for low-income students. And thus, college debt contributes further to the widening net worth gap between white and minority families, which goes against the point of going to college.

Many colleges and universities are suffering from rising costs, lower endowments, fewer donations and a recession. Getting students in the door is the only solution—so they go after them hard. Yet allowing colleges to enroll highly vulnerable young people, having them sign on the dotted line for outrageous amounts of money, and not supporting them fully feels predatory.

The crippling debt doled out by colleges, whether or not the students graduate, needs to be addressed. And so does the dropout rate for schools other than the big research universities.

It may not be possible for schools to lower the cost of attending college, but I believe there is much within their power to encourage graduation and lower student debt.

Colleges should accept any student they want. But before a student with loans is allowed to matriculate, there should be a financial advisor who helps the student plan for more than just the first year. Low-income and first generation students should be required to take a financial education training to help them understand the terms of their loan and the consequences of not graduating or defaulting. Loan officers and the federal government should allow students to have aid even if going to school part-time. Forcing students to take more classes than they can handle lowers the chances of success.

A higher level of support for these students is also clearly needed. Retention specialists should be hired to support and advise students. Cut down the red tape by having a one-stop shop for all financial aid, registrar, and advising services. Colleges should also be more flexible with status changes to allow students to change seamlessly between full-time, part-time, and even allow for semesters off without penalty. Students should be matched with a student mentor who can help them navigate the system from the inside.

Lastly, for-profit colleges, the subprime mortgage lenders of education, need more regulation. Nearly all of for-profit students take out student loans (88 percent) yet only 22 percent graduate. Preying on ill-advised non-traditional and first-generation students, these colleges are more than immoral. Legislation and accreditor oversight is needed to ensure these colleges do not take advantage of their students.

At a time when colleges are rapidly changing to accommodate online education and MOOCs, it seems a good time to make some important changes to protect the most vulnerable students.