This is a weird one.

As we speak, I’m sitting in the basement of Webster’s, a coffee/book/record shop right by Penn State’s campus. I’m here working on a Bleacher Report piece—long journey of flying a red eye from Los Angeles to Philadelphia, arriving at 7 o’clock this morning, renting a car and driving 3 1/2 hours here.

After resting for an hour, I Tweeted about my arrival in town. A few moments later I received this e-mail …

Trudi is a former newspaper reporter who is new to her post of helping guide Penn State’s daily newspaper. Someone alerted her to my Tweet. Probably, oh, 30 minutes later, I arrived at the newspaper’s office, which was cool and modern and loaded with the energy of young scribes trying to make a difference.

Which, again, is sort of a weird one.

Why? Because in the Lord’s year of 1990, all I wanted to do was graduate from Mahopac High School and attend Penn State. Though my parents took me on myriad collegiate visits, Penn State was my top choice—hands down. The campus is awesome, the town is gorgeous, the sports scene terrific (this was pre-scandal, obviously). Because Penn State is a state school, it’s also relatively affordable, even if you’re a kid from New York.

Anyhow, I applied. And I presumed I’d get in. My 1130 SAT score was certainly high enough. I was a solid B+ student. I was editor of the high school newspaper, captain of the cross country team, member of VAASA (Varsity Athletes Against Substance Abuse). Hell, I was probably the only member of VAASA who actually didn’t drink.

Penn State was my future. No doubt about it.

Then, the letter arrived. I still remember gazing at the envelope. It was suspiciously thin. “Dear Mr. Pearlman. Congratulations on your acceptance into Penn State …

And that was that. I wound up attending Delaware. It didn’t have Penn State’s journalism program. The paper only came out twice a week. Journalism wasn’t a major. There were only three or four professors.

It’s one of the best things that ever happened to me.

Attending Delaware allowed me to write ASAP. It gave me access to a man named Bill Fleischman, who taught journalism with an inspiring edge I needed. It introduced me to Mike Freeman. Mostly, it placed me alongside a group of journalistic peers who took pride in being underdogs. Yeah, we weren’t Penn State. But we’d kick Penn State’s ass. And, I’m guessing, we did. Back in the early 1990s, members of The Review staff landed at top newspapers and magazines across the country. It was a magical nugget in time; one I wouldn’t trade for anything.

It was nice finally seeing what Penn State could have been. 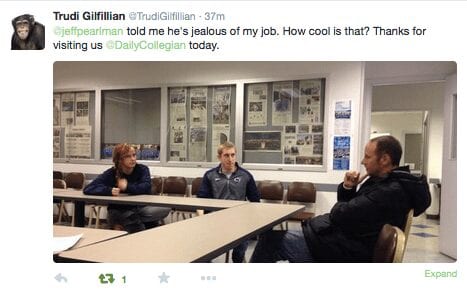