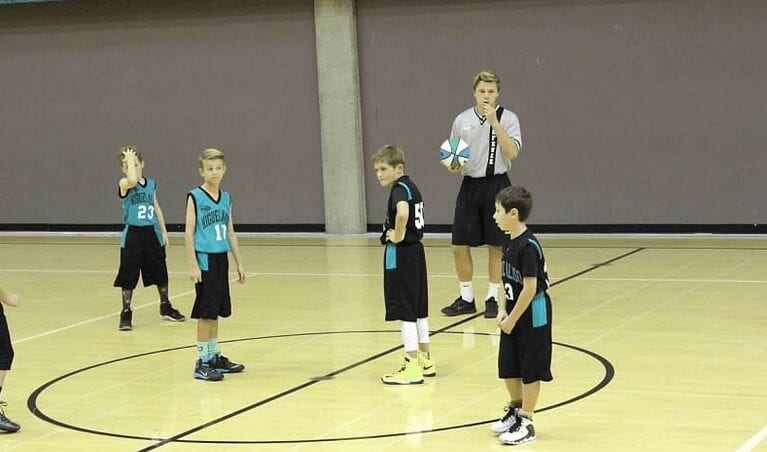 I’ve been a sports journalist for more than two decades, and I’ve covered some absolutely amazing games. Off the top of my head, there was the first post-9.11 ballgame at Shea Stadium, when Mike Piazza homered for the win. There was also the Robin Ventura walk-off. There was Delaware beating Drexel to reach its first-ever NCAA Tournament. There was Cal Ripken, Jr.’s final All-Star Game. There were World Series moments, NBA playoff moments. On and on and on.

Today, however, one game trumped them all.

It was the Wolverines against the Grizzlies, a battle of Niguel Aliso NJBL foes held inside the Laguna Niguel High gymnasium at 11 am. The Grizzlies entered as the best team in the league. The Wolverines came in with an 0-7 record.

Christ, it’s been a rough season. The Wolverines are a bad team, with a roster of one great player, two very good players and five kids who never experienced organized ball before this year. One of those newbies happens to be my son, who is also the youngest and shortest Wolverine. Emmett is actually a solid athlete—quick, curious, inspired by defense. But he has yet to grasp the rhythm of basketball. The flow confuses him, the transition from offense to defense trips him up a bit. His reaction time can be measured in hours, not seconds—though its improved dramatically. Through seven games, his line is about 0.0 ppg, 2 apg, 4 turnovers per game. I think he hauled in three rebounds, all by accident. However, he’s (in my mind) one of the Wolverines’ top defenders. To my delight, he loves holding people scoreless.

Anyhow, despite the losing, the kids are mostly happy. Emmett has loved being a part of the team, and if setbacks get him down (and I don’t think they do), the disappointment lasts for three seconds. He’s always psyched to get into his black-and-aqua uniform and lace up his sneakers. It’s a thrill; one I recall well from my boyhood.

Today’s game looked to be a blowout. During warmups the other team was precise and sharp. Their coach also coaches the varsity at the nearby high school. There were no Vegas odds on the game, but the Grizz were a solid 18-point favorite.

Then some amazing shit happened …

The Grizz couldn’t hit shots. The Grizz couldn’t rebound. Our best player, ol’ No. 42, was on fire, stealing balls repeatedly, hitting layups, slashing to the hoop. A kid named Austin, who had yet to score this season, hit a magical jumper. Emmett—who rarely shoots—took two shots from just outside the paint. He missed both, but barely.

For some reason, this league plays five eight-minute periods, with a running clock. Midway through the fourth period, we were down by five. Then three. Then one. Early in the fifth, the Wolverines somehow grabbed a one-point lead, and held it …

… for a while. Emmett was on the court nearly the entire game, often dribbling the ball up, then passing off to a scorer. He never looked uncomfortable, though sometimes he forgets to dribble out of trouble. As the remaining time dripped from three minutes to two minutes to on, I found myself cheering loudly, applauding, standing up and living with each shot. I’m not that type of sports parent. Like, not at all. I don’t care about winning or losing—as long as it’s fun.

But I really wanted this win.

Sadly, the Grizz took the lead with, oh, 55 seconds left. Our team fought, fought, fought—but could never regain the advantage. Emmett had a chance to shoot at the end, but sorta froze.

Ultimately, the Wolverines lost again, by just one point. Afterward, a couple of kids had tears in their eyes. The coaches looked somewhat dejected. I was exhausted and a tad sad.

Mostly, though, I was euphoric.

Even when your boy loses.