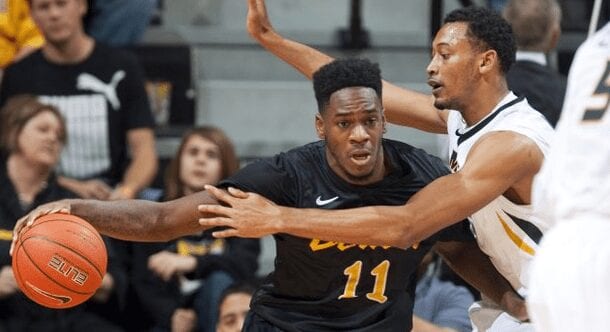 For no particular reason, save for fun, I took my son to yesterday afternoon’s Hawaii-Long Beach State basketball game at the Pyramid.

It was only Emmett’s second college hoops experience—and the first was a Division III clash between Manhattanville College and, um, a school I’d never heard of. The boy was probably 5 at the time, and barely remembers it. This, however, he’ll remember.

As we waited for the contest to begin, we scanned over the Long Beach State roster, searching for a guy to root for. The team’s leading scorer, a senior guard named Mike Caffey, was appealing. So was freshman guard Justin Bibbins—just because his last name is Bibbins, and it’s really fun to say three times fast (Really, try it. BibbinsBibbinsBibbins).

Ultimately, we went with geography.

We went with David Samuels.

The senior forward is from the Bronx, a mere stone’s throw from our old home in New Rochelle, N.Y. He sports an awesome haircut, a warm smile, a uniform number we both like (11) and extraordinarily cool sneakers. He played two seasons at Collin College in Plano, Texas, and averages an unremarkable 9.5 points and 6.8 rebounds per game for a team that’s struggled to emerge in the Big West Conference.

So we picked Samuels, then watched the cheerleaders and the crazy MC and the wild student section and the band. And the game started …

And Samuels was awesome.

He really was. If you’re a fan of shoot-first, shoot-second, shoot-third gunners, Samuels isn’t your guy. He’s sort of the anti-gunner, and probably looks to pass a little more than he should. But that’s OK, because the guy bangs. And boxes out. And throws elbows. And sets picks. And sprints down the court. He sweats like a boxer perpetually in the 11th round, never takes plays off, dives for loose balls. I’m not sure if any of the other 3,500 in attendance paid David Samuels much notice, but we were his official fan club. Emmett couldn’t get enough of the guy (“Dad, did you see what David did on that one!”) and I was thrilled, because he was watching basketball played the right way, by a smart, team-first participant.

The game itself was awesome. Hawaii opened with a 12-0 run, Dan Monson (the Long Beach coach) pulled the entire starting lineup, the team quickly clawed its way back and won in a laugher, 65-50. After the final horn, an ESPN reporter (the game was televised on ESPN3) pulled aside Travis Hammonds, the slashing off guard who led the team with 12 points.

But, as far as Emmett and I were concerned, she had the wrong dude.

But he was the story.

PrevPreviousDMV. Yeah, you know me …
NextThe physicality of Michael BennettNext