Stop labeling all fraternities as evil 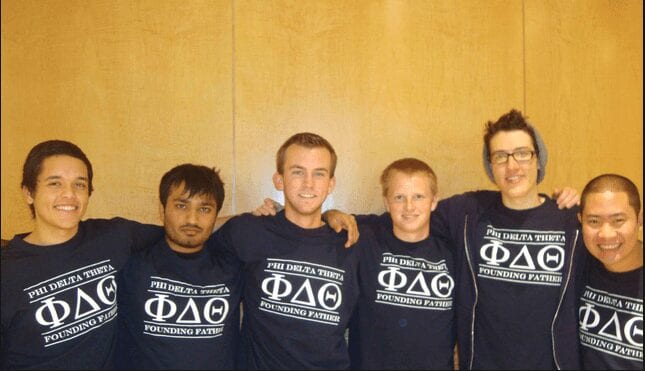 Mike Abelson is a freelance journalist and brother of the Alpha Epsilon Pi fraternity. Here, he offers his thoughts on the aftermath of the Oklahoma fraternity scandal. You can follow him on Twitter here.

Earlier this week the fraternity system, and America, was rocked by a video showing the University of Oklahoma’s Sigma Alpha Epsilon chanting a racist song on a bus. Make no mistake, any punishment those men receive is justified. Yes, it is a shame to have your future tainted by something done in college, but as legal adults you have to deal with the consequences to your actions. Kudos to Oklahoma and the national chapter of SAE for taking swift action.

While Oklahoma’s SAE deserves every bit of punishment it gets, the greater Greek Life system at American colleges does not. Yet, when any fraternity or sorority strays off the legal path, those who do not know, or understand, the system feel it right to decry the end of the system as a whole.

Why? Why should a collegiate institution that stretches back to 1825 be disbanded over the actions of a few? The biggest problem is a disproportionate gap between the amount of students within the Greek system and those outside of it.

Only 2-to-3 percent of American college students are in Greek Life. That’s it. However, 76 percent of the United States Congress are Greek alumni, and every U.S. president and vice president, sans two, have been members of fraternities.

Now, it’s very easy for the vast majority of non-Greek members to band together to speak out against Greek Life when given opportunities like SAE—and many have. Eugene Robinson of the Washington Post called fraternity men “soft, pampered, ridiculous frat boys.” The boys from the Oklahoma SAE certainly fit the mold of that statement as do the fellas in Animal House. However, as a member of a fraternity, I take that as a slap in the face.

I, like Jeff, grew up a middle-class Jewish kid in the Northeast. My mother’s a teacher and my father’s a salesman. I am not soft. I am not pampered. I’ve been a journalist since I was 16 and took the initiative myself to build my career. I am not ridiculous.

You know what is ridiculous? Having swastikas spray-painted onto your fraternity house, which happened to the Alpha Epsilon Pi house at UC-Davis in January and at Emory College in October. Those aren’t ballyhooed. They should be. All assholes should be punished like Oklahoma’s SAE.

I will not stand on a soapbox and say that students in Greek Life are better than those who are independent. In all four years of my time in school I never once lived with one my brothers. I lived with people outside my fraternity. It was one of the best decisions I ever made. When you insulate yourself within a small group of people groupthink happens. Too often, this leads to a warped view of reality beyond the walls of the group and can, in some cases, lead to you chanting racist, horrible things on a bus.

I do want to ask where is the outcry about the horrors of college athletics when athletes break the law? George Huguely, a Virginia men’s lacrosse player, murdered a women’s lacrosse player at UVA in 2010. Baylor basketball player Carlton Dotson shot a teammate dead in 2003. Go Google “college athlete rape” and the first search request will send you to a page detailing the history of college athletes and sexual assault, both alleged and convicted, dating back to the 1970s. There were 11 such cases documented in 2014 alone.

Being a collegiate athlete involves living in an incredibly insular community, and you have the added power of being star pupils competing in events on a national stage and representing the school. There are far fewer athletes competing in college than there are students in Greek Life. Why is no one raging against the machine of this system? I love college sports, but you will never hear a soul say that college sports are soft, pampered or ridiculous.

What is ridiculous? Beating a member of your organization with a two-by-four to death as part of an initiation. Where did that happen? In Florida A&M’s marching band in 2011. Was anything written about the horrors of being in the school band? No.

There are scumballs wherever you go. We, as a society, should be trying to bring those people forward to justice rather than cast off a whole group into the bin as being soft, pampered, or ridiculous.