Muhammad Ali and me 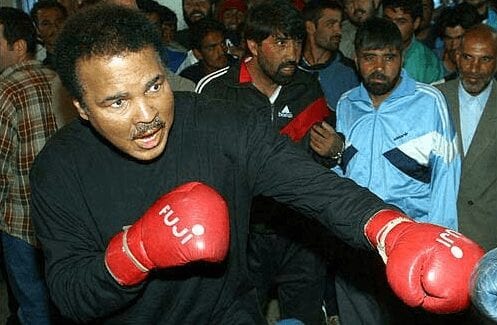 This past week we had a house guest, who seemed somewhat intrigued by the life of a mediocre hack writer. So I started telling her some fun stories—John Rocker and Barry Bonds and sneaking into corporate Christmas parties and Naked Cowboy. Then I remembered one of my best: Muhammad Ali.

This was either 1998 or 1999. I was a writer-reporter at Sports Illustrated, which meant I did a fair amount of writing around the country and a decent amount of fact checking in the Manhattan-based office. One day Rich O’Brien, an editor at the magazine, asked if I’d like to meet Muhammad Ali.

It turns out Ali was in the city, promoting some sort of facility he and his people were building in Lexington, Kentucky. They were holding a press event and Ali would be there and blah … blah … blah.

I arrived at an office building. There was a table, the size of one found in millions of American kitchens. A PR man sat on one end, Lonnie Ali (Muhammad’s wife) on the other. There were three chairs side by side by side. Dick Schaap, the legendary (and since deceased) journalist sat in one to the far right. I sat in the middle. And Muhammad Ali—the Muhammad Ali!—sat to my direct left.

I was introduced to both men. Ali did his signature fists up boxing thing, then we sat down to listen to the PR man’s presentation. It was brief and unmemorable, save for a single moment. About 20 minutes in, the PR guy—mid-talking point—motioned to Ali and said, “Right champ? Right?”

I looked at Ali. His eyes were closed. He was lightly snoring. It was awkward and uncomfortable and …

Suddenly, he opened his eyes and began to speak. “There’s a Mexican guy, a black guy and a Puetro Rican guy in a car,” he said softly. “Who’s driving?”

All five of us laughed.