The best teacher in America 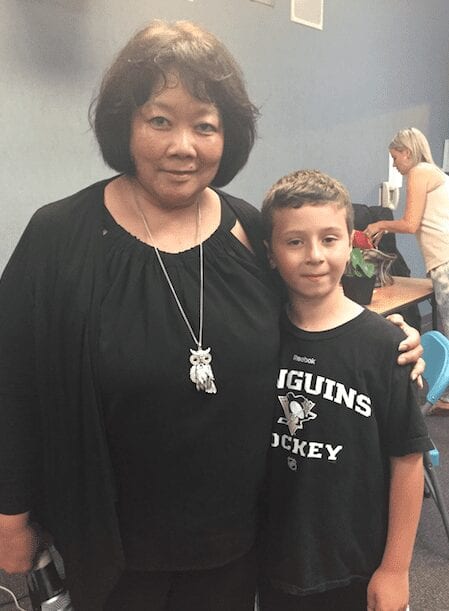 The woman in the above photograph is named Josie Boys.

She is the best teacher in America.

Now, admittedly, we’ve become a country where the word “best” means very little. Hell, just turn on the TV and see how often it’s erroneously applied to nonsense. There’s the best pizza, the best NBA player, the best swimsuit model, the best politician, the best frozen yogurt, the best amusement park. We’re always on the prowl for the best when, truth be told, it almost never actually exists. The “best” pizza tastes great in your mouth and crappy in mine. It’s all opinion and perspective.

But not here. Not this time.

Josie Boys is the best teacher in America, and I know this to be true because it would be physically and emotionally impossible to exceed her splendor. We first met her a few days after our arrival in Southern California and, well, we were immediately concerned. In our corner of New York, the average elementary school class size was, oh, 22 kids. There were enormous staffs, tons of after-school options, etc … etc. Suddenly, however, here in the Golden State our son was being thrown into a class of THIRTY FOUR children. Not only that, it was a split group of second and third graders. I won’t speak for the wife, but … actually, I’ll speak for the wife. We were horrified. And terrified.

Mrs. Boys is not overly expressive or dynamic. She has a very calm, reassuring demeanor. Were she an NBA player, she’d be more Tim Duncan, less LeBron James. Initially, I took this for meekness—and I couldn’t have been more wrong. I’ve never seen a teacher own a classroom like Mrs. Boys. I’ve never seen a teacher love and embrace her students like Mrs. Boys. I guess it first hit me after, oh, two weeks of school, when we received notice of a weekend class trip to a local movie theater. A weekend class trip? Um … why? Then I attended, and understood: She wanted these kids to form a bond. With her, yes. But mostly with one another.

Because the public schools here are so under-funded, teachers rely heavily on parent participation. The result was a rare opportunity to watch a masterful conductor in action. Mrs. Boys’ class is a riveting whirlwind of organized excellence. There’s always a project; always a new idea; always kids being asked to lead and express themselves and develop skills I’m guessing many teachers ignore. Perfect example: one month ago, Mrs. Boys asked the class if they wanted to do a year-end play. She told them it could be really fun and really special, but that she’d solely be a supporter, not a leader. Over the ensuing weeks, the kids divided up responsibilities, practiced dialogue, anointed directors and cast members and such. The show was tonight, and it was breathtakingly good. Why? Because Mrs. Boys was wise enough not to lead. She saw a learning opportunity, and jumped on it.

Unlike a good number of teachers I’ve met over the years, Mrs. Boys doesn’t see the job as an 8 am-until-2 pm endeavor. Nope. She stays after to help, to chat, to advise. There have been myriad class projects that result in the kids hanging until 3:30 … 4 … 4:30. Mrs. Boys is always there—calm, cool, endearing. She knows my son. And she knows Davis. And Quinlan. And Ariana. And Jason. And Keeley. And … every kid in that classroom. She knows them. She loves them. She takes pride in them.

Truth is, even though I’m a writer, I’m not doing Josie Boys justice. So I’ll put it this way: Tomorrow is the final day of school, and I’m heartbroken. Not because my son is getting older and time is flying by. No, I’m heartbroken because I know the boy will never again have a teacher of this caliber.

He’ll never have another Josie Boys.