Nicholas Winton and the death of a quiet hero 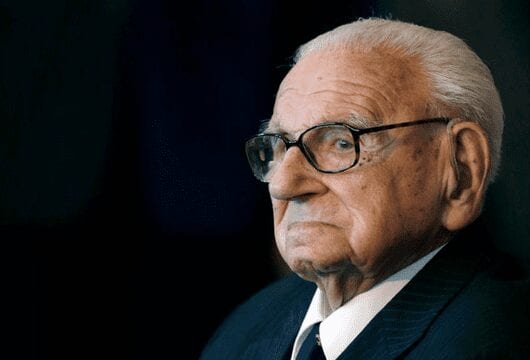 If you read one thing today, then again tomorrow and the next day and the next day, make it the New York Times obituary of a man named Nicholas Winton, who died in England at age 106.

Which, in a sense, is why he is a big deal. A really big deal.

Back at the start of World War II, Winton organized the escape of 669 children (most of them Jewish) from what was then Czechoslovakia. He was, at the time, just another guy; a London-based stockbroker who, as the Times obit says, “canceled a Swiss skiing vacation and flew to Prague at the behest of a friend who was aiding refugees in the Sudetenland, the western region of Czechoslovakia that had just been annexed by Germany.”

Winton was disgusted by the refugee camps, and immediately created a mass-rescue effort. Writes the Times: “It involved dangers, bribes, forgery, secret contacts with the Gestapo, nine railroad trains, an avalanche of paperwork and a lot of money. Nazi agents started following him. In his Prague hotel room, he met terrified parents desperate to get their children to safety, although it meant surrendering them to strangers in a foreign land.”

I don’t want to steal all of the newspaper’s words, but Winton was a hero. Only he didn’t think of himself as a hero. When the war ended, he returned to his normal life, never uttering a peep about his deeds. It was only in 1988, when his wife discovered a scrapbook, that anyone knew of his bravery.

And here’s the thing: People like Winton are far too rare. We live in an age of barking and self-promoting; of Kim Kardashian selfie books and LeBron James crowing how he’s the best player on the planet. We Tweet out our accomplishments, then double down on Facebook. Our egos generally eclipse our deeds, only we don’t see it as such. We’re No. 1! The Man! All eyes on me and win at all costs. It’s ugly and sad and all consuming.