A special kind of stupid 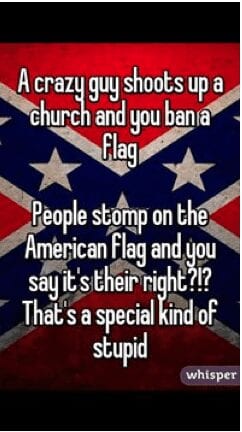 Facebook is the landing spot for lots of things. Family photos. Motivational sayings. Sports predictions. But, truly, what it leads the world in is nonsense.

I found it earlier today on the Facebook page belonging to a high school friend. It received 18 likes, also from (primarily) high school friends. I could pretend this staggers me, but it doesn’t. Because, sadly, I attended high school with a uniquely large number of closed-minded folks.

The “crazy guy” didn’t “shoot up” a church. The race-hating killer murdered nine people. Not merely nine people—nine African-Americans. Inside an African-American church. Deliberately, because of the color of their skin. He proudly brandished the Confederate flag, just as many other racists have, throughout the South’s long and ugly history, brandished the Confederate flag.

Truth be told, the flag should have been removed from the South Carolina statehouse long ago. It’s a symbol of pro-slavery times—period. The shooting simply served as a reminder that, even in an America led by an African-American president, racism is still an enormous problem, and the flag represents racism. And nobody banned it. If you want a Confederate flag in your house, on your car, painted to your mailbox—go ahead. Totally fair game. It’s just no longer in front of the state capitol. As it shouldn’t be.

As for the American flag, it’s quite simple: A nation that promotes free speech—lives by free speech—must allow its people to express that right in the most uncomfortable of forms. And nothing is less comfortable than watching an American flag burn on American soil. The moment we ban flag burning is the moment we say the First Amendment needs to be compromised. Which would be an ironic argument for a conservative to make, considering any compromising of the Second Amendment is considered to be unpatriotic.

So, really, the special kind of stupid isn’t taking down the Confederate flag while allowing the torching of the American flag.

Nope, the special kind of stupid is a failure to grasp the reasoning.