Mr. Timberlake, will you pose for a selfie?

Today was a long, hot one in Lake Tahoe, California.

I’m here doing some book reporting at the Lake Tahoe Celebrity-Am Tournament. Which, really, means, standing around and waiting for former athletes (or, as they’re labeled here, “The Celebrities”) to wrap their rounds and hopefully talk to me.

Because I have zero interest in golf, one might think this to be a dull endeavor. And, indeed, it largely is a dull endeavor. But, as I returned to my caisno hotel tonight (where Third Eye Blind is playing for $39 a ticket), I started thinking about the weird shit I witnessed. Here’s a brief sampling …

• Brian Baumgartner is playing in the tournament. I was standing along the ropes, talking to a woman and her two teenaged children. The woman told me they’d had the serendipitous surprise of sharing a cab from the hotel to the course with Baumgartner. “My son recognized him,” she said. “I had no idea.”

I looked at the boy, an incoming high school junior, and said, “You recognized Brian Baumgartner? That’s pretty amazing.”

“Really?” I said. “I remember him being kind of skinny.”

Only later did I learn Brian Baumgartner is this guy—an actor who appeared in The Office. I was thinking of Brian Boehringer—former Major League reliever of little note. Who, for the record, was quite thin. And probably still is.

• Roger Clemens is playing in the tournament. He might actually be the biggest non-Justin Timberlake, non-Aaron Rodgers celebrity of the day. Roger Clemens hates me, and has made that very clear. However, Roger Clemens would never recognize me by face. So, just to say I did so, I walked up and stood about 12 inches away. Here’s the photo, taken on my approach … 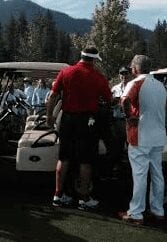 • Kenny Lofton is here. And he’s wonderful. Gregarious, funny, chatty with fans, signing all sorts of autographs. I mean, he could not be any nicer. And it’s weird, because when I was covering the Major Leagues and he was a Cleveland Indian, well, the guy was the worst. No, wait. Albert Belle was the worst. But Lofton was second. Just dismissive, rude, arrogant. And there’s a part of me that wants to approach, introduce myself and ask why, once upon a time, he behaved in such a manner. Maybe tomorrow …

• Sebastian Janikowski is the worst golf cart driver I’ve ever seen. I mean, we all know those people who intentionally drive like crap. But Janikowski came t-h-i-s close to running over a kid. I told this to another writer, and he said, at a different location on the course, the same scene took place. REALLY nice guy, though.

• I don’t know what to make of Marshall Faulk. One of my all-time favorite players, and a terrific golfer (I’ve been told). But today, well, an incident became the buzz of the gossip circle. While he was on the course, Faulk was approached by a fan who asked him to sign a No. 28 Rams jersey. Faulk told the guy he doesn’t sign while playing; that he should catch him afterward. The guy threw the jersey at Faulk. F-bombs ensued, and the fan was tossed from the tournament.

• I defy anyone to find a warmer, kinder ex-athlete than Mark Rypien, the former Redskins quarterback and Super Bowl MVP. Seriously, lovely man.

• Bret Saberhagen was here. And Vince Coleman. Sort of a 1990s Mets awfulness reunion. But Saberhagen’s socks make up for the bad seasons … 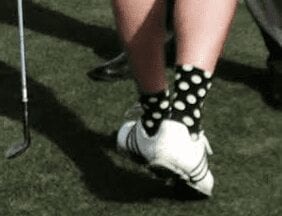 • OK, my absolute favorite moment. Of today. Of the week. Of, perhaps, my life. It’s, oh, 12:40. And people are waiting for Aaron Rodgers. And he arrives. Blue shirt, confident walk. And he signs a bunch of autographs, but refuses to pose for selfies (I commend him for this). He’s walking toward the driving range, and simultaneously there’s growing expectation that Justin Timberlake will arrive shortly. So Rodgers is walking … walking … walking, and suddenly this woman, oh, 30 feet away yells, “MR. TIMBERLAKE, WILL YOU POSE FOR A SELFIE!?!?!” Now, admittedly, this is something I could see doing as a joke. But she wasn’t joking. Dead serious. Rodgers actually didn’t hear the error, and simply said, “Sorry, I don’t pose for selfies.” The woman was clearly sad, so I walked over and said, “Well, good news. That wasn’t Justin Timberlake.”

“No. It was Aaron Rodgers.”