On celebrity and golf

I’m here for the second day of the American Century Celeb-Am Tournament on gorgeous Lake Tahoe.

It’s a pretty sweet event. Tons of free food in the media room, complimentary wifi, the coolest PR staff I’ve ever dealt with (no exaggeration. Phil Weidinger—awesomeness). And, best of all, celebrities.

No, lemme rephrase that. CELEBRITIES!!!!!!

They’re everywhere. Walking here, walking there. Putting, chipping, driving. You can’t sneeze without pelleting a celebrity with your snot spray. Which, while gross, is also sort of amazing. Because it’d make for a terrific selfie—you, Vince Coleman and your snot on Vince Coleman’s free celebrity American Century 73-percent knit beige T-shirt. I don’t think that’s why so many spectators have shown up, because snot is quite nasty. But they are here for autographs. And selfies. No, selfies! Celebrity selfies!

The same goes for Jay DeMarcus, a man I also just Googled. Wait—snap! Jay DeMarcus is, too, a member of Rascal Flatts. He’s also not the lead singer. He plays bass, which is sort of the equivalent of listing Bruce Berenyi as a “key member of the 1986 New York Mets.” Not that bass isn’t an important instrument. It is. Sort of. Well, no.

I digress. With no further ado, I offer my breakdown of today’s “celebrity” lineup, with my 1-10 rating of “celebrity” status (10 being huge star, 1 being me) …

• Mardy Fish (2): I had to Google Mardy Fish. I’m glad I did, because he’s a courageous guy with a superb story. But if a Fish walks onto a golf course, and nobody recognizes a Fish, is a Fish famous?

• Brian Baumgartner (6): I was standing along the ropes, talking to a woman and her two teenaged children. The woman told me they’d had the serendipitous surprise of sharing a cab from the hotel to the course with Baumgartner. “My son recognized him,” she said. “I had no idea.”

I looked at the boy, an incoming high school junior, and said, “You recognized Brian Baumgartner? That’s pretty amazing.”

“Really?” I said. “I remember him being kind of skinny.”

Only later did I learn Brian Baumgartner is this guy—an actor who appeared in The Office. I was thinking of Brian Boehringer—former Major League reliever of little note. Who, for the record, was quite thin. And probably still is.

• Colt Ford (6): Ridiculously large and jolly country singer. Yesterday I watched him struggle to open a cooler holding water. “What do you expect,” he cracked. “I’m a redneck.”

• Justin Timberlake (10): Not as friendly to spectators as you’d think. Clearly loves being around other celebrities. Not that it’s a crime.

• Alfonso Ribeiro (7): Forgotten little fact—was in a Pepsi commercial with Michael Jackson when the King of Pop’s hair caught on fire. Extremely warm and gregarious.

• Cris Collinsworth (8): Couldn’t be nicer. Or skinnier. I know little about golf, but I can tell you he’s pretty bad. But signs everything, engages in lots of chatter.

• Willie Robertson (9): Duck Dynasty guy. Famous for being famous. Or for having a big-ass beard.

• Joe Sakic (7): Great hockey player—a sport that resonates like wrist warts in this part of the country. 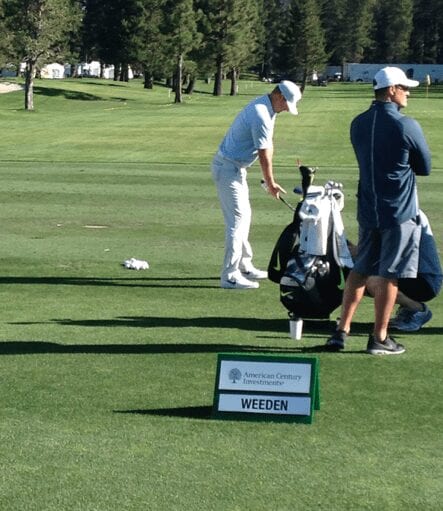 • Roger Clemens (10): It’s a weird thing. Everyone knows he cheated. I mean, it’s a non-secret. Yet the other ballplayers here treat him with compassion, warmth. So what if he stole paychecks? It’s golf time!

• Jeremy Roenick (5): Back in college, he was THE guy in Sega Hockey. Wouldn’t recognize him.

• Alex Smith (8): Boring, friendly, looks like anyone in the world. Has the misfortune, once again, of being in the same pool as Aaron Rodgers.

• Mike Modano (7): A bunch of fans wearing Modano Stars jerseys today. He’s one of those guys who was huge when he played, but turns invisible in retirement.

• Vince Coleman (2.5): Grumpy once-upon-a-time base thief whose cousin was an NFL punter. As friendly and warm as a snake.

• Billy Bush (8): Has definitely blown up. The awfulness that is the modern Today Show makes him look even better.

• Kevin Millar (5): Ordinary Major Leaguer who shines on TV. I once spent the day with him when he was a Marlin. Couldn’t have been more fun.

• Ozzie Smith (10): Also warm; signs everything. Would be kinda cool if Garry Templeton showed up and the two swapped tee times.

• Brandon Weeden (3): He better enjoy this one. Because “celebrity” doesn’t apply once you’re out of the league (with his resume). Plus, I know a whole bunch of folks who think his first name is Braden.

• Sterling Sharpe (6): One of the all-time great NFL receivers isn’t particularly famous these days. But he’s a loud talker.

• Mark Mulder (6): Smoltz without the charisma and Hall of Fame resume.

• Jim McMahon (7): It’s weird. Theismann was a far superior quarterback, and he played in more Super Bowls. Yet something about McMahon is eternal …

• Derek Lowe (7): Guys like Lowe are interesting. Very nice careers, played recently enough so he’s remembered. But does he snag a “celebrity” invite four years from now? No.

• Marshall Faulk (9): Orney dude, had a fan throw a jersey in his face yesterday. Hey, it happens.