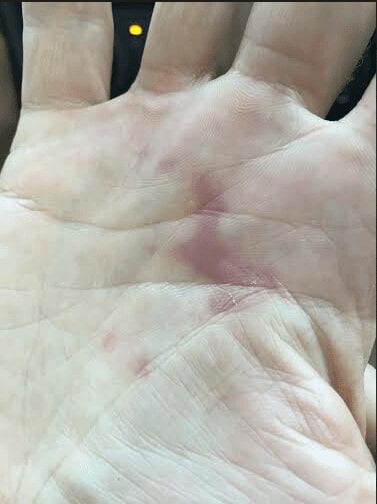 So a few days ago, while we were still on vacation, I was hanging with my nephews, ages 11 and 14, and the kid of family friends—age 13.

The 13-year-old is named Dylan, and he was talking and talking and talking about something called the “salt ice challenge.” I didn’t know what this was, so he explained. “You pour salt in your hand, then you grab a bunch of ice cubs and squeeze really hard. It’s supposed to burn, and you see if you can do it for 30 seconds. If you can, you’re legit.”

I laughed the whole thing off, because it was laughable. Dares are for kids, not adults. I no longer throw snowballs at passing cars, or see if I can eat two pieces of white bread in under a minute. I’m no longer a dare guy. Haven’t been for many moons.

I bit. I said I’d give it a try, so three of us—me, Dylan, Jordan—all stood before a sink, sprinkled some salt into our palms, then gripped ice chunks. And … it friggin’ killed. Like, really, really, really burned in a fireplace sort of way. I sucked it up, held tight, waited for 30 seconds to pass, then dropped the ice and salt and quickly washed off my hand. Now, 72 or so hours later, I still have a red, horse-shaped mark on my palm. Which sucks pretty badly …

… but doesn’t suck as badly as the accompanying video. See, my other nephew, Isaiah, filmed the thing, and then—thinking it was funny—I put it on Instagram. A few hours later, while watching it with Jordan and the wife, I realized (with a laugh, admittedly) I looked less like a guy taking the ice salt challenge, and more like a guy jerking off into a sink.