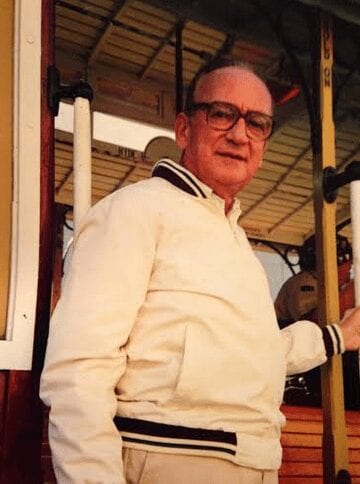 Hanging on the wall above my office desk is a whole lot of stuff. There’s a Candy Maldonado baseball card. There’s a sign that says, JEFF PEARLMAN REGRETS HE WILL NOT BE ABLE TO SIGN HIS BOOKS (long story). There’s a Sports Illustrated pennant, an MC White Owl autograph, a press credential, some paintings from my kids, a copy of the speech I gave in my failed bid for 10th grade government at Mahopac High School.

And a photograph of John Baer, my Grandma Marta’s brother. My great uncle.

I found the picture a year or so ago, while digging through old albums in my parents’ house. I’m not sure if the image projects this, but, to me, something about Uncle John always reeked of regalness. He had a way about him—a confident walk, bold statements, an intelligence and keenness that made you want to listen and follow. We’d only see Uncle John three or four times per year, but the visits were almost always memorable. What I think of most was a decade or so of annual visits to his home for the opening Passover seder. Unlike the way we did things inside the Pearlman household, the seder was precisely conducted under Uncle John’s watch—and he was the leader and primary reader of material. With his crisp German accent and tattered haggadah, Uncle John made Passover … meaningful. Yeah—I know. For Jews, it is meaningful. But not when you’re 9 or 10, and your stomach is rumbling, and you just wanna eat the damn noodle kugel.

Somehow, despite the hunger and the length (about 1 1/2 hours), Uncle John’s seders had me. I didn’t just like them. I loved them. Looked forward to them. Was sad when the evenings ended and all the plates had been cleared. Every Passover, I think of Uncle John, sitting in his chair, yarmulke atop his bald head, deliberately combing through page after page after page.

Oh, wait. One other thing: For some reason, Uncle John always called my brother David by “Doovdiddle.” Which I absolutely loved, because it gave me a new away-from-Uncle John’s-house nickname to taunt my only sibling with. For a stretch of, oh, 15 years, I either called David “Doovdiddle” or “Doovie.” I always presumed it was the German translation of “David.” Well, I learned tonight that the German translation of “David” is, eh, “David.” Weird.

My great uncle died in Nairobi on July 10, 1990. A heart attack was the cause. I know this because, along with the photograph, I found a brief New York Times obituary. I remember hearing the news and a tidal wave of shock slamming into my body. Uncle John was only 71, filled with vigor and energy and life. I’m pretty sure my Aunt Ruth had to fly to Africa to accompany the body home. I can’t imagine what that was like.

I remember the funeral. It was only the second I’d ever attended—my Grandpa Curt had passed a year earlier. What I recall most vividly is seeing dirt tossed atop his pinewood coffin, a Jewish star crudely etched into the top. It was terribly sad; the first time I’d ever really thought of existence being snuffed so suddenly. My grandma was broken, having lost her little brother. My Aunt Ruth was broken, having lost her husband.

And I was 18, still newish to the world but well aware Passover would never be the same. 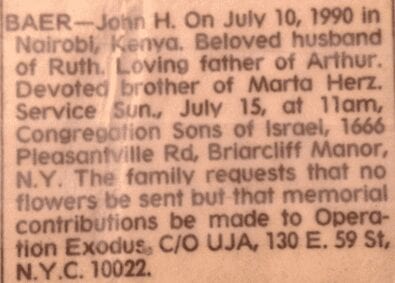 PS: Really wanna thank Paul C., a commenter, for this. Feel like a mystery has been solved: Jeff, bubbeleh, “Doviddle” is the Yiddish affectionate diminutive for “Dovid,” or, “David.” It essentially translates as “Little Davey.”