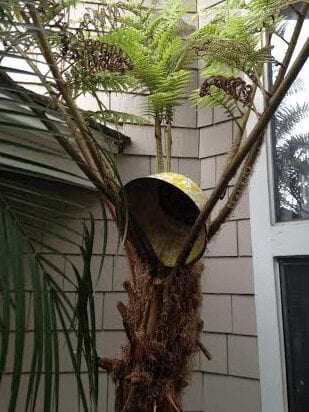 When we moved from New York to California last year, I debated whether Mr. Mullins’ bowl should make the trip.

Mr. Mullins had been our up-the-block neighbor in New Rochelle. He was a man in his 90s who was suffering from dementia. Sometimes, on a hot Wednesday afternoon, he’d be standing in front of his driveway, wearing a brown suede suit and tie, waiting for the bus to church. Which didn’t exist. It was quite sad. I’d see him and say hello, ask a few questions, hope he was managing as well as possible.

He died four or five years ago. It was depressing, but also a tiny bit of relief. He was alone and unsound. It couldn’t have been a great life.

Anyhow, a few days after his passing I saw a yellow bowl in Mr. Mullins’ backyard. I’m guessing, at one time, it’d been used to feed a pet. It was rusty, battered. Nothing a relative would save. Hence, in honor of Mr. Mullins, I grabbed it, brought it home and wedged it between two branches in a front-yard tree. When people asked, I’d explain Mr. Mullins from up the street, and that the bowl was serving its purpose.

We moved. I thought, “Maybe I’ll leave it with a neighbor, to talk to people about Mr. Mullins, the old man who once existed on Taymil Road.” At the last minute, though, I grabbed it and packed it in a box.

Now it rests between branches on a palm tree. It falls out quite often, because the branches are thin and wobbly. I always pick it up.

When I do, I remember Mr. Mullins from up the block.