Jason Chaffetz and all that’s wrong with government

In case you missed it, earlier today Cecile Richards, the president of Planned Parenthood, testified before the House Oversight Committee because of videos that allegedly showed the organization’s heads discussing the sale of fetal tissue.

It was, to be polite, an ugly day for Richards, who faced a slew of pro-life Republicans who hammered her left and hammered her right. Some were better than others, obviously, and on occasion there were even mild tones of respect.

Then, we came to Jason Chaffetz, a Republican of Utah and the committee chair.

Chaffetz is a hard-core conservative, and I have no beef with that. He’s also hard-core pro-life, and I have no beef with that either. I know a good number of people who believe abortion should be illegal, and I think it’s a reasonable argument to be made. If you truly believe life is precious, and you also believe fetuses count as humans, being anti-abortion makes sense. Do I side with you? No. Not even remotely. But I understand.

The thing is, there are ways to agree and ways to disagree; there are ways to probe and ways not to probe. And today, Chaffetz crossed a line. His questioning of Richards was, frankly, bullshit, because it wasn’t actually questioning. See, when one asks a question, he is (logically) seeking an answer. For example, I’m covering the Mets. I see Dave Wright. I ask, “Dave, how’s your back?” He replies, “It’s feeling much better. Thanks for asking.” We’re both satisfied. I got to ask, he got to answer. Bravo.

“You created this slide. I have no idea what it is,” Richards said.

“Well, it is the reduction over the course of years — in pink, that’s the reduction in the breast exams — and the red is the increase in the abortions,” Chaffetz said. “That’s what’s going on in the organization.” 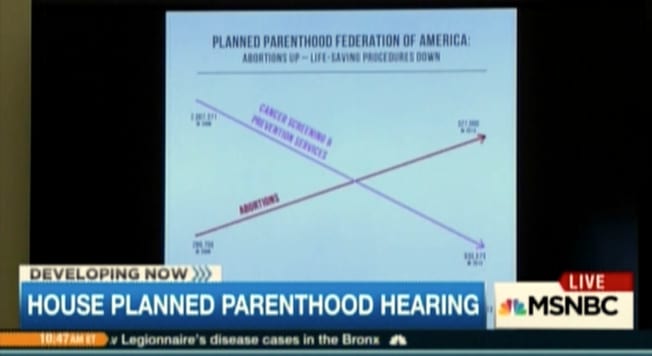 The exchange that ensued was pure awesomeness. Richards said she had nerve before seen the slide, and that it “absolutely does not reflect what’s happening at Planned Parenthood.”

“I’m going to deny this slide that you just showed me that no one has ever provided us before,” she said. “We’ve provided you all the information about everything—all the services that Planned Parenthood provides. And it doesn’t feel like we’re trying to get to the truth here. You just showed me this.”

“I pulled those numbers directly out of your corporate reports,” Chaffetz said.

“Excuse me,” Richards said. “My lawyers have informed me that the source of this is Americans United for Life which is an anti-abortion group so I would check your source.”

Knockout blow to the chin. Chaffetz paused, smiled weakly, stuttered a tad and said, “Then we will get to the bottom of the truth of that.”

Sadly, none of this matters. No matter what Richards says, and no matter how important Planned Parenthood is to millions of American woman, Tea Party-esque conservatives now believe it to be Satan’s spawn. They want it unfunded, and they want it closed. Yes, they say, abortion is legal. But it shouldn’t be, and government needs to do something about it (of course, access to 8,001 guns is also legal, and shouldn’t be—but heaven forbid anyone touch a firearm). So instead of seeing men like Chaffetz for what they are (overmatched lightweights with thin agendas), the right applauds them, hails them, deems them future leaders of our entire nation.