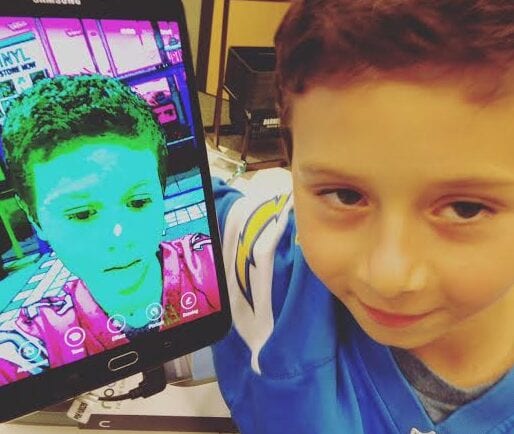 We’re celebrating his birthday with dinner, dessert and, of course, presents. Among the stuff he’ll be receiving are a pair of awesome throwback jerseys for a kid who digs (to my great delight) 1980s NFL highlight videos. We got him these …

Since the subject is gifts, I was thinking about a big one my boy has given me. Namely, he’s brought back my love of sports.

I know … I know. You’re a sportswriter. You have to love sports. Well, that’s not entirely true. My main thing, since I started writing books, has been nostalgia; picking subjects (with rare exception) that take me to a certain time and place. I’m in front of my TV, age 13, watching the Bears in the Super Bowl. I’m sitting in Nashville, age 21, and Aikman is hitting Michael Irvin in the end zone. On and on. Memories, enhanced and colored by sporting events. That’s been my bag for the past decade. But actual modern sporting events … no. Beginning toward the end of my time as a Sports Illustrated staffer in 2003, they increasingly bored me. I didn’t care who was pitching for the Reds, or whether the Dolphins drafted the quarterback from Colorado or the defensive end from Oklahoma. Today’s story was yesterday’s story, only with a different name and uniform number. There was always an unexpected comeback, and a hot rookie, and a faded veteran giving it one last go, and a coach under pressure, and someone brought in to “change the culture.” Yawn, yawn, yawn. I stopped caring. I stopped paying attention. People presumed, because I wrote a book on the 1986 Mets, I knew more than the average schlub about Ike Davis and Jose Reyes. Truth is, I was in a sports-induced coma. I knew less—proudly.

Then Emmett came along. And, as he aged, he started asking questions. What does that guy do that for? What’s it mean when someone pump fakes? How many steps can a person take before he dribbles? He became enthralled by the colors and emblems. The Chargers’ helmet, the Bengals’ stripes, the Knicks’ sneakers. Why are the Browns called the Browns? And why are their uniforms orange? We started watching games—mainly the NFL, but also NBA and MLB. The wife made him a Giants fan. I grew up loving the Jets. We mock argued. Oh, and the 1980s NFL highlight videos. So many 1980s NFL highlight videos! My son, born in 2006, knows of Billy Sims more than he does Reggie Bush; loves Eric Dickerson far more than Todd Gurley; thinks the Tampa Bay Bucs need to return to the old unis and that all athletic endeavors must be accompanied by classical scores.

About five years ago, I bought him his first jersey—a blue Osi Umenyiora Giants No. 72. Then he got a No. 21 Chargers dark blue LaDainian Tomlinson. Others followed—a Brooklyn Nets Deron Williams, a Brett Favre Green Bay Packers, a Kobe Bryant, a throwback Tracy McGrady Toronto Raptors. We began combing the shelves of Marshall’s, seeking out some random Shane Matthews Florida offering. The hunt for funky weird jerseys—that became our thing. It was my way of living vicariously through him. At age 43, I can’t really get away with donning my dream jersey. But, through the boy, I’m good.

I coached Emmett in Little League. We’ve now played 100 games of catch. Pop ups. Grounders. We would go to the cage and hit—12 balls for a quarter. More questions—what do I do with my elbow? Should a mitt be too big or too little? We attend games—UCLA-Stanford, Azusa Pacific-Central Washington, Dodgers-Rockies.

A few months ago Emmett and I did something I swore I’d never participate in: We created the Mahopac Gatorsaurs, an NFL.com fantasy football team. The draft was amazing. We debated, talked, reconsidered. Every day we check in on the team, see who’s available. And I love it. I love every second of it.

Earlier tonight, I found myself in front of the TV, watching the eighth inning of Dodgers-Mets at Citi Field. Daniel Murphy was up, bottom of the eighth, and I was excited. Like, genuinely excited. Would he get a hit? Strike out? I had no clue.

But I wanted to share the moment with my buddy.