10 Things You Didn’t Know About “The Bad Guys Won!” 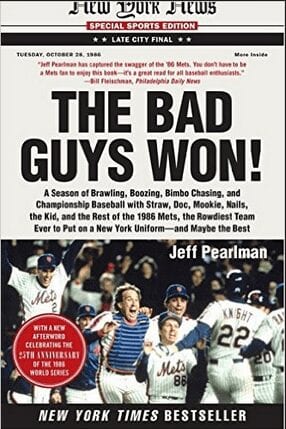 This is sorta random, but a decade ago I wrote a biography of the 1986 New York Mets titled “The Bad Guys Won!” It was my first best seller, and a very meaningful project (having grown up in New York and all). Anyhow, I meet tons of Met fans who seem to dig the book, so I figured I’d share some secrets. Just … because.

1. The title was almost, “The Wild Bunch.” Which I loathed: I had “The Bad Guys Won!” in my head throughout, because it was a quote from Davey Johnson that perfectly suited the team. Then one day my HarperCollins editor, David Hisrshey, said, “I think we’re changing the title to ‘The Wild Bunch.’ I begged him not to, and he refrained. Which is great, because while David is terrific, ‘The Wild Bunch’ is not.

2. The date on the cover of the hardcover is wrong—and I heard tons about it: The thing is designed to look like a newspaper from the day after the Mets won the World Series. On the book jacket, it reads MONDAY, OCTOBER 28, 1986. But Oct. 28 was a Tuesday. Ugh. 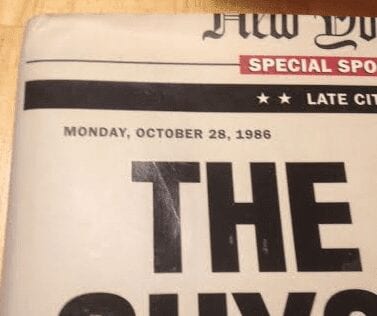 3. Lenny Dykstra asked for money and a hotel: I swear to God, not that it’s so hard to believe. I was told a few times that Nails would cooperate, but never heard much. Then I got him on the phone, and he asked how much he was making and where would I be putting him up. Alas, he was never interviewed.

4. Jay Horwitz sent me home from Shea with six binders from the season: I didn’t really know the Mets PR chief back then, and from afar had a negative feel. But now, a decade later, I love the guy. He could not have been more helpful, and when I arrived at the stadium, he had these two enormous blue duffle bags waiting. There were covered in dust, probably from years in a closet. Jay let me hold onto them as long as I needed.

5. The dedication in the front of the book reads: “To Catherine and Casey Marta, mis dos Earlitas (And in memory of Walter (he got what he deserved).”: Catherine is my wife, Casey my daughter. “Earl is a family nickname.” The Walter line is the title of the first chapter of my father’s 1986 business book, titled, “Conquering the Corporate Career.” Walter was our guinea pig. 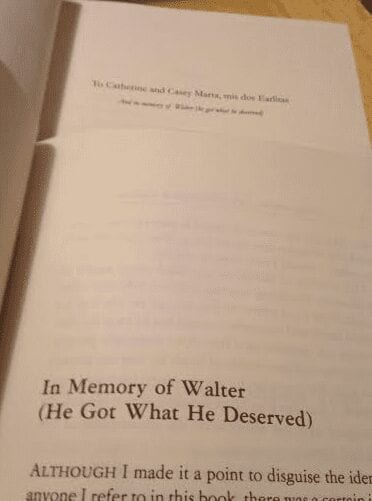 6. The book wasn’t my idea: I was working for Sports Illustrated, and contacted by an agent named Susan Reed. She asked if I wanted to write books. I told her I had an idea—a biography of KISS drummer Peter Criss. She said, “How about the ’86 Mets?” Changed my life.

7. Neither Dwight Gooden nor Darryl Strawberry cooperated: One was in jail at the time, one just refused. I remember being panicked, thinking, “How can I write this without these two?” That’s when I learned a valuable biographer secret: Guys like Dwight and Darryl have told their stories 10,000 times. Doug Sisk and John Mitchell were in the same room, experiencing the same things.

8. I met up with Kevin Mitchell in California, and he was livid that Gooden had accused him of slicing off a cat’s head with a kitchen knife: The material appeared in Doc’s autobiography, “Heat,” and Mitchell swore it was not true. He promised to confront Gooden the next time they appeared somewhere together. A few months later, they appeared together—and Mitchell uttered nary a word.

9. I hate the subtitle. Like, h-a-t-e is: It’s: “A Season of Brawling, Boozing, Bimbo Chasing, and Championship Baseball with Straw, Doc, Mookie, Nails, the Kid, and the Rest of the 1986 Mets, the Rowdiest Team Ever to Put on a New York Uniform—and Maybe the Best.” I mean … seriously. Thirty-nine words? I’m probably the only author in America who can’t recite his own subtitle.

10. The great find was an obscure rap, “Get Metsmerized”: Since the book, there have been T-shirts, re-releases, etc. But at the time, nobody knew this thing existed. Not only was it real, it was orchestrated by George Foster and powered by every greedy instinct a man can muster. One of the background singers was his nanny. Found her—and knew I was onto something.