On terror and Halloween

So last night a friend and I went to The 17th Door, which has been billed as one of America’s two or three scariest haunted houses.

And, indeed, it has to be one of America’s two or three scariest haunted houses. Because I’ve probably been to, oh, a solid dozen r-e-a-l-l-y strong, heavily hyped Halloween attractions (before moving to California, my nephews and I would seek out the top regional haunted houses to experience), and this was king—by far.

Here’s the thing. The difference between great haunted houses and crappy haunted houses can be summed up in a single word: Anticipation. Scaring people is not about gore, or loud screams, or a man chasing you with a knife. No, no, no. Scaring people is about the anticipation of gore, the idea of a need for future loud screams, the possibility of a knife-wiedling psycho waiting around the corner as you creep closer … closer … closer. Blood is frightening, but the worry of impending bleeding is 1,000-times more frightening.

This is what The 17th Door did so well. Hell, before even starting one must sign this waiver … 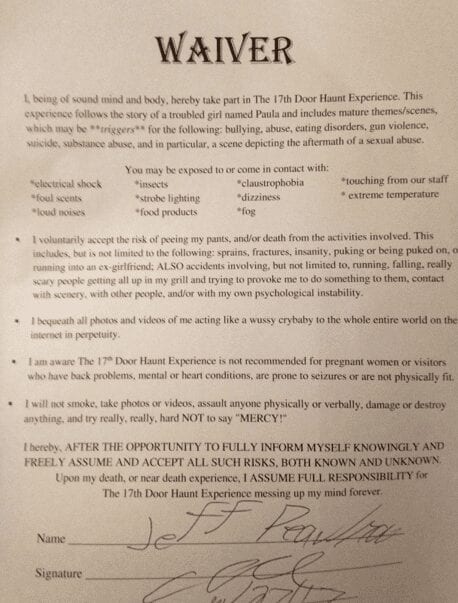 Electrical shock? Insects? Touching from our staff? Shit—that doesn’t sound particularly wonderful. Which is—in haunted house terms—perfectly wonderful. Because now The 17th Door is in your head. Am I about to be shocked? Will insects be thrown at me? Do I really want to do this?

What unfolds (well, unfolded) for me was a merging of fear and euphoria. More euphoria, because I don’t scare easily. But some fear. The house opens with 20 people placed in a warped classroom, with a weird old teacher in front, explaining the waivers. Midway through her creep chat, a kid in the first row pulls out a gun, waves it at us and then shoots himself in the head, blood splattering on the wall. We’re then told to enter the first of 17 rooms. You can’t leave a room until the light above the door switches from red to green. You can always escape by calling, “Mercy!”—aka “I’m a wimp and can’t handle this.”

The room-to-room journey was … something. Some of the stops were remarkable. One room featured what seemed to be a school cafeteria from 1962, with a psychotic chef demanding we eat. He threw nasty-looking food at us, rubbed dead fish into our faces. Another room was a butcher’s shop (I think), with real dead pig heads suspended from the ceilings, the smell of rot as clear as day. There was a room with a crazy clown man who walked around shocking people on the torsos with one of those low-voltage (but legitimately painful) hand zappers. In a particularly unpopular room, (what appeared to be) live cockroaches were thrown at us and rubbed onto our heads. Every room had a number, and as we got closer and closer to the 17th Door the fear grew. What would the 17th Door actually be? We’d already gone through zappings, cockroaches, fish, pig heads. What. Could. It. Be.

We approached No. 17. Every member of our group was placed in his own casket-sized area, and the door was closed. I waited, waited, waited. Nothing happened. So I opened the door and walked out, confused. My friend Mike exited his booth, looking sweaty and a bit dazed. I told him about my experience, and he said, with a smile, “Man, you have to do the 17th! That’s the whole experience!” So I approached a deranged clown, told her I never got the 17th and she said, “OK, get in!” I got in. It was dark and tiny. A little warped person entered, asked my name. I said, “Bob.” He/she started babbling about Bob. The deranged clown woman reappeared and taped my hands together. I removed the tape when the door closed. She returned, taped them again—and my head. I actually recorded some of the sound on my phone. Take a listen if you’d like.

Oddly, the 17th door in The 17th Door wasn’t particularly scary. But the overall experience was terrific, and the organizers deserve huge props.

Speaking of organizing, the video that leads this post is from the annual haunted house I do at my son’s elementary school. I actually used to do one back in New Rochelle, but it was merely a haunted hallway. Here we have a nice space, so I construct a maze, hang up tons of skulls, goblins, etc. The key, as I noted earlier, is suspense. I had about 15 volunteers, all dressed in masks and creepy outfits, all waiting around corners. We probably had a solid 15 kids cry and another 20 back out. Which is OK, because I always offer two levels—one not-so-scary, one terrifying.

I suppose this is my long way of saying that I friggin’ love Halloween. Everything about it. Pure fun, no religious obligation, no guilt, no suits or ties or dresses, no following along in a prayer book, no counting the minutes off, no kissing Aunt Phyllis on the cheek because she gave you socks.