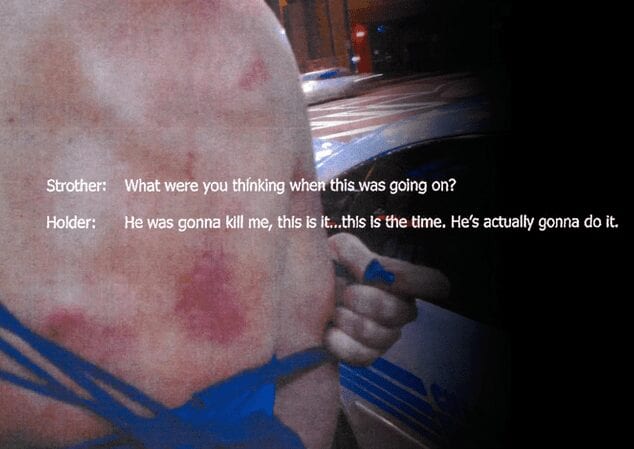 If you’ve spent even a moderate amount of time around professional sports, you’ve surely heard myriad references made to “real men.” It often comes in a coach addressing his players before a game, or midway through a particularly daunting stretch. “This will be a test,” he’ll say. “Are we real men, or are we not?”

Seriously, I can’t tell you how often I’ve heard this phrasing. Over. And over. And over. And it’s always ridiculous, because the definition of a “real man” is reduced to one who steps up and performs in the artificially created confines of a field, or a court. It’s not real. It’s a fake world, with bright uniforms and cartoonish muscles and salaries that defy logic and explanation.

Every so often, however, these “real men” are provided a test to be real men. Like now. Like this weekend.

In case you missed it, earlier today Deadspin posted devastating photographs and details of the beatings Greg Hardy, NFL star, put on his ex-fiance. It’s graphic, it’s disturbing and it’s worthwhile viewing—if for no other reason than providing a gripping view of what domestic violence actually looks (and feels) like. It also means the NFL, and its players, can no longer feign ignorance and pretend we know not what happened. We do know: Greg Hardy is an awful human being who did awful human being things to a woman incapable of defending herself. He’s jarringly unrepentant, but capable of sacking quarterbacks at a high enough rate that the Dallas Cowboys (and Jerry Jones, the owner) offered him boatloads of money to do so.

In short, I want them to be real men.

Which means, truly, they stand up for nothing at all.