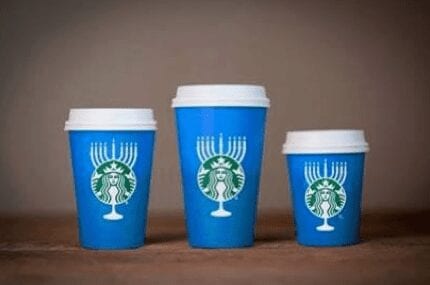 Chrismakwanzukah: A term used by retailers to celebrate all three holidays: Christmas, Kwanza, and Hanukkah; thereby including most of demographics they are selling to.

Let’s talk about this seasons villain. Starbucks changed its cups red to combat the evil political incorrectness and coddle the sensitive American public. Hooray for you, Starbucks, you get a trophy, and by today’s standards in society everyone gets a trophy because everyone is special and doesn’t know how to handle disappointment. Because in the real world it’s all candy and sunshine and no one is ever let down by anything … I’m going off topic but this has to do with it.  In all honesty, I really don’t give two shits about this and you shouldn’t either; it has absolutely no effect on us if the cups are red, purple, or adorned with menorahs and crucifixes. Rarely can I spare a car payment to drink coffee there anyway, but it amazes me how, on both sides of the argument, people are sooooo upset Starbucks is pulling the same stunt at least one or two big companies have been pulling every year for the past decade or two.

People are calling for boycotts and petitions and crying, but why? What does it really do that changes your day? I normally boycott Starbucks because I don’t usually have 50 bucks laying around for a thimble full of burnt coffee with a pound of sugar in it. The people who think it’s a good idea will show support by buying from the store, the people who don’t will stop buying from the store, and then nothing will change. Literally nothing—at least on the consumer end of things. I did see a video of one guy who was telling the baristas that his name was Merry Christmas, so they had to write it on the cup, which is hilarious.  Agree or disagree, any way to stick it to big business is OK in my books.

So why do people care so much? I don’t recall a Christmas where I collected coffee cups to decorate my house. Nor have I ever suffered any mental anguish because there was a menorah painted on the window as I sipped my cup o’ Joe. And I know for damn sure seeing religious or semi-religious symbolism on display never caused my (or anyone’s) head to explode. Of all the thought to be put into it, there really is no clear reason why it’s a big deal to either side—other than people like to bitch and moan with the other bitchers (yes, I just made bitchers a word, I’m an Enlgish major, I have the power) and moaners; the chorus of complainers gets louder every year.

It really wouldn’t be that big of a deal if they didn’t announce their actions like they’re some leader of the “progressive” movement. Wake the hell up people (coffee pun right there), we are all part of the only “progressive” movement in history that actually works in reverse. Censorship, coddling, appeasement, and melodrama don’t make for progression, it makes for bickering and lets the people pulling the strings take advantage of all the stupidity.

If you lose sleep over coffee cups, who wins? Not you. If you get your way and have the symbols back on/removed from the cups, who wins? Still not you. Do you honestly think the CEO’s of Starbucks give a flying fuck about any of this? I’m sure they wrestle with their conscience as they lay out cash for their third private jet. It’s all free advertising. Hell, just me saying “Starbucks” as much as I did in this piece will probably boost their revenue in some way. That’s what everyone should be angry at; that they’re taking advantage of all the bullshit and winning while the world squabbles.  hat is Starbucks Chrismakwanzukah gift to everyone, causing grief and profiting from it. Not because they can, but because we let them.  Don’t you think it’s time to stop being led around like fools, getting all up in arms about how some corporation decorates its cups?

If you’re answer is a firm no, stop reading.  But if it’s a yes, or even a maybe, how about this: Why not support local coffee shops? Yeah, this isn’t a revolutionary idea, but really, why not? Why not take your money into town and find the coffee shop with the hand-painted murals by the local school kids, the one’s that support local music, the one’s where the money you spend stays within the community?  I would bet anything their coffee is 10-times better than the mass-produced stuff in any Starbucks.  Just this passed weekend the lady and I found out that the best coffee ever is located in town at a local shop and you can be damn sure we’re gonna be going back a lot.

And instead of announcing its coffee cups outerwear for the holiday season, the shop will be announcing all the new cool flavors of coffee and food to be makde available. Why? Because that’s how a business should be run. Not by causing a frenzy with all the sheeple and collecting off of it.

• Steve Straface is a writer and native of Mahopac, N.Y. Here, he offers his take on red Starbucks cups and holiday weirdness. You can read more of his work here.