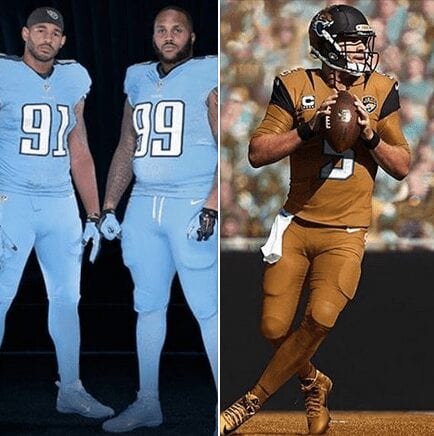 In case you missed it, this week the NFL is having its players perform in ridiculously heinous neon-ish uniforms. Hell, this morning the wife (who doesn’t watch a ton of football) said to me, “What were the Jets in last night?” Indeed, it’s bad.

But also interesting, and timely. Just a few days ago, at my son’s Little League game, one of the parents was talking about Angels pitcher C.J. Wilson. He was going on and on about why he doesn’t like Wilson, blather, blather, blather, blather. But then, something interesting. He said, at some point in time, the Angels clinched a playoff birth, and while all the players wore the MLB-distributed T-shirts and hats, Wilson and his wife refused, instead peddling their own merchandise. The man found this quite offensive; an affront to teamwork and togetherness. I’m not entirely sure how true his words were, but I did find this photograph …

Maybe the man is right. Maybe it’s best if athletes behave as mindless lemmings, following the line of teammates into the playoffs and sport immortality (or something like that). But there’s something unspoken here, and it’s a point I’m willing to guess Wilson agrees with: Athletes are, first and foremost, models.

That’s why we’re seeing the neon jerseys. Not because they’re cool or unique. Nope—because players will model them, and then you’ll buy one. Or five. Or 10. It’s also why I admire people like Wilson, who refuse to merely go along. His basic message seems to be, “Why should I see your shirts, when I can sell my own?”