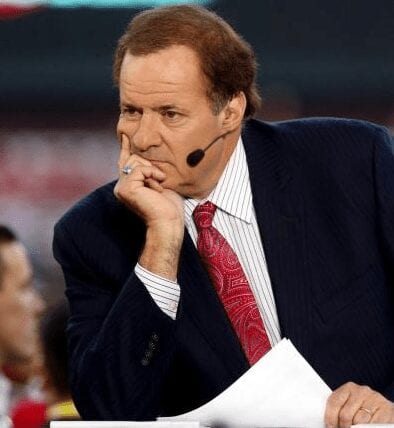 I was watching SportsCenter at the gym tonight when Chris Berman (admittedly, my second all-time least-favorite TV personality) offered up a brief ode to France and the French people in light of this week’s attacks. And it was fine. Nothing noteworthy, but fine. Then, before moving on, he noted that he was wearing a blue jacket, red tie and white shirt in honor of France.

And … I dunno. I just … eh, something about it irked me. Which, perhaps, makes me a dick. I’m not sure. But I struggle with these things. With doctored Facebook icons. With hashtags. With magnet ribbons. I just do. I mean, I struggled with the ice bucket challenge, too, especially when it reached a point where Justin Bieber and the members of One Direction made it a fad. But at least the challenge—self-indulgent as it became—raised a ton of money to fight ALS. Which is tremendous.

Chris Berman wearing the colors of the French flag does nothing.

Actually, scratch that. It does one thing, and one thing only: It makes us feel good about us. Which, again, might not be so terrible. But what purpose does it serve? Does Chris Berman wearing French colors on SportsCenter help the French people? No. Does it offer them comfort? No. Does it bring peace or cause ISIS to take pause? No. Does it raise awareness to something we don’t know about? No. It’s just the type of thing we do in the aftermath of horrific tragedies, when we’re all sort of walking around in a daze, confounded by what happened and perplexed by what to do next. We wear colors, and type #prayforParis, and change our Facebook photo. Which, collectively, accomplishes nothing. Literally, not a thing.

But here’s the catch: I am a dick. Because while it all bothers me, I know of no better alternative. Certainly there are charities related to Paris that would be worthwhile. Maybe letters that could be written to the wounded. Perhaps we all could get off our iPads and away from SportsCenter and try to understand ISIS and Radical Islam and the political reasons Paris was specifically targeted. I dunno.