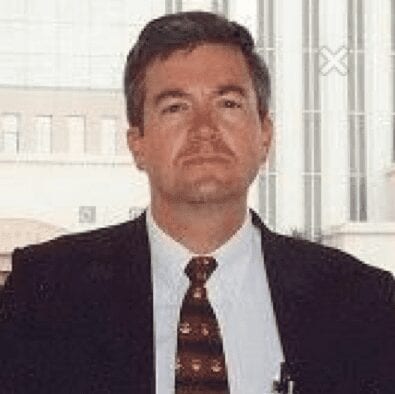 Hal Moroz was a judge.

Not a TV judge. Not a wet T-shirt contest judge. Nope, en elected judge. At one point in time, he served as a county judge and city chief judge in the state of Georgia. I’m not certain when that was, or for how long, but even though he’s no longer technically a “judge,” Hal Moroz continues to refer to himself as “Judge Hal Moroz.”

Much like a flaccid penis can remain an erection, depending on whether a steel rod has been inserted into the shaft.

Twitter is a weird and wacky place, because it brings you to people like Judge Hal Moroz (no longer a judge). Oftentimes, this is wonderful. If one has ever read The Quaz, he/she will know I dig speaking with folks who don’t share my views. It can be enlightening, educational. Sometimes you even come to change your mind, or at least open yourself to a different take.

Once in a while, though, you run into folks like Judge Hal Moroz (no longer a judge), and you’re simply reminded that this potentially beautiful world is a fucked-up place.

Judge Hal Moroz is no longer a judge. But he was one. Meaning, not only did people respect his opinions, but he was trusted with weighty matters and a requirement of looking at things with an open mind (in a truly ridiculous nugget, Moroz served as a presidential ballot inspector during the 2000 recount). He also refers to himself, repeatedly, as “a Christian.” Which conveniently leads to some of the no-longer-a-judge-but-still-calls-himself-a-judge’s recent Tweets … 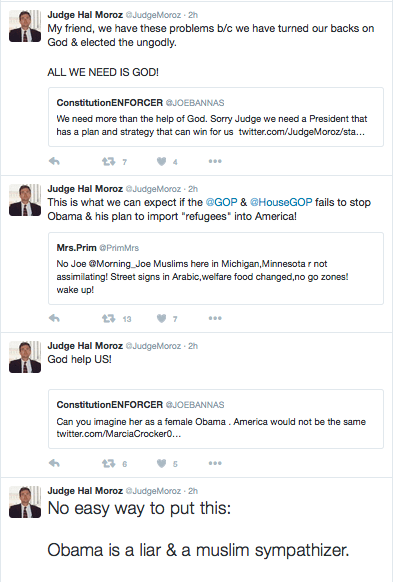 I’m not sure where to start here—so I’ll start with this: No Christian writes this shit. Yeah, I’m Jewish. But so was Jesus. And I’m 100-percent convinced a man who walked with the sinners and sought out goodness in all would quickly block Hal Moroz’s Twitter account. Now, Hal Moroz won’t agree, because, well, he’s Hal Moroz, and loud statements and angry rants are the predictable 2015 gateway to moderate big-fish-in-a-small-pond quasi-fame. But I beg him to ask his pastor. Literally, print out some Tweets and bring them to church next Sunday. See how that flies.

Two nights ago my daughter had a sleepover with her best friend, who happens to be a lovely 12-year-old (gasp!) Muslim girl. She’s one of my favorite kids around—smart, bubbly, energetic, polite. And her parents come to our house. A lot. They’re great. Work in banking, live nearby, partake in Little League and water polo and all the myriad activities. Once a week the mother goes to the local mosque and prays for her family’s health, for tranquility, for peace. They are good people. As are all the other Muslims I’ve met throughout my life. All of them.

I’m guessing one of two things about  Judge Hal Moroz (no longer a judge). He …

A. Has never actually interacted with a real Muslim person.

B. Is just an unconscionable bigot.

Because, well, how else to explain his blatherings? You can’t possibly know an American Muslim and believe what Moroz does. It literally makes no sense. Or, put different, it would be akin to associating all Christians (Moroz included) with the actions of the Westboro Baptist Church, or abortion clinic bombers, or 100,000 other sinners who did so in the name of God and Christ.

Moroz’s rants actually hit at a good moment, because they serve as a necessary reminder of what we must not become. In times of crisis, we instinctively flinch and react with irrational fear. As an (admittedly random) example, remember when Ryan White, the teenager from Kokomo, Indiana, was diagnosed with AIDS in 1984, and all the terrified parents demanded he no longer be allowed in school? That’s exactly what we do; that’s exactly what a horrible human being (but, wait, he’s a Christian!) like Judge Hal Moroz (no longer a judge) is doing now. We demonize. We pinpoint. We ridicule.

Alas, all of this calls for nuance. And men like Judge Hal Moroz (no longer a judge) don’t pedal such offerings. It’s either one side or the other. In this case, it’s either you’re a hard-core Christian conservative or you’re not. You want God back in school. You want the Ten Commandments posted publicly. You want more God, less science. You want your mainstream foreign-born president impeached, and replaced by a man who follows the exact word of the lord and savior, whose teachings came to print centuries ago.

Which, ironically, makes you sound less like an American.

PS: I Tweeted at Hal Moroz last night, pointed out that he never ripped George W. Bush after 9.11. He offered a predictably lame response, then blocked me. Also predictable. (Oh, and he referred to me as “Idiot!” Again—Christian? Really?) 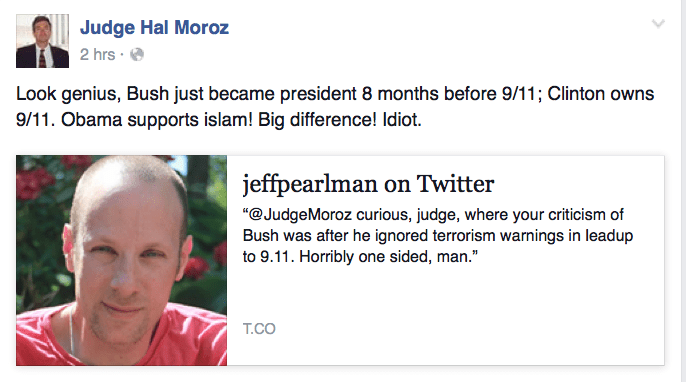