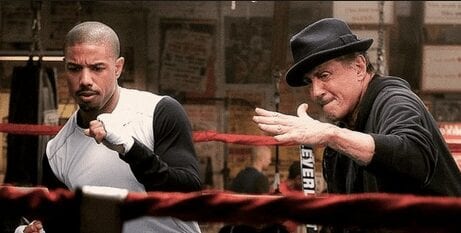 My review of Creed.

But loving a movie doesn’t mean it’s a great film. For example, I love The Cable Guy. Laugh 1,000 times per viewing. But is it great? No.

Creed, which opened yesterday, is great.

My judging of good film v. great film usually comes down to a simple measure: Did I think about it after leaving the theater? Did it stick in my head? Did I play out the scenarios, review the actors, consider the relationships and what was v. what could have been? In short, did the film hang within my cranium far beyond the final credits?

First, some background: As a guy raised on the Rocky films, I was somewhat horrified what became of a once-glorious franchise. Rocky I was terrific. Rocky II was a necessary sequel. Rocky III was brought to life by the marvelous Mr. T as Clubber Lang. But then—shit. Rocky IV, featuring the illogical death of Apollo Creed, is a terrible film; one of those Independence Day-type movies where, with every viewing, you become increasingly attuned to its awfulness. Rocky V (Rocky Balboa as a brain-damaged shell, mentoring the wooden Tommy Morrison) is unbearable—even Sylvester Stallone admits regretting it. And Rocky Balboa, which came out nine years ago, is passable popcorn entertainment, but forgettable and, bluntly, dumb.

Which brings us to Creed. Without giving away too much, Michael B. Jordan, a tremendous young actor, stars as Adonis Johnson, the out-of-wedlock son of Creed, the former heavyweight champ who died in the ring during a bout with Ivan Drago in Rocky IV. He never knew his father, had a weird upbringing, does some fighting in Tijuana and ultimately winds up in Philadelphia, where he tracks down a worn-yet-endearing Balboa and begs him to train him.

The ensuing 1 1/2 hours are magical. Stallone is terrific. Through all the highs and lows of a strange cinematic career, Rocky is the character that fits him best, and his portrayal of an aged Rocky trumps his portrayal of an in-his-prime Rocky. Here, as a restaurant owner without many friends or much of a life, he oozes … the mehs of life. Nothing bad, nothing great. Just a guy getting along, aches and pains and grunts and all.

Then Johnson arrives, and a spark ignites. Jordan hates being Apollo Creed’s son and loves being Apollo Creed’s son. He wears the crown with shame and glory, and Jordan—a magnificent young actor—captures the dichotomy perfectly. The scenes with Jordan and Stallone are special, and they go far beyond boxing. It’s about youthful hopefulness and energy vs. aged weariness and boredom. Adonis desperately wants what Balboa had. Balboa knows it’s not entirely what it’s cracked up to be. Riveting.

One of the greatest things about this film: The fighting, and the ring choreography. Go back and look at the first four Rocky films. The boxing is surprisingly awful. I actually often wonder what Stallone was thinking. There’s nearly zero defense. One guy throws 10 punches, the other guy absorbs each blow then fires back with 10 more. It’s silliness, and it’s also the reason so many boxing experts cringed at those films. They weren’t lifelike. They were cartoons.

Creed, though, is lifelike. Following Johnson (who changes his name to Creed) through a tunnel and into the ring is breathtaking shit. No exaggeration—my palms were sweating, my heart was racing. The final fight is the best boxing sequence you’ll ever seen on the big screen. It’s real, it’s raw, it’s intense, it sticks with you.

Just as Creed does, too.

PrevPreviousBeauty in a simple act
NextAll athletes cheat on their wivesNext