Giving in a parking lot 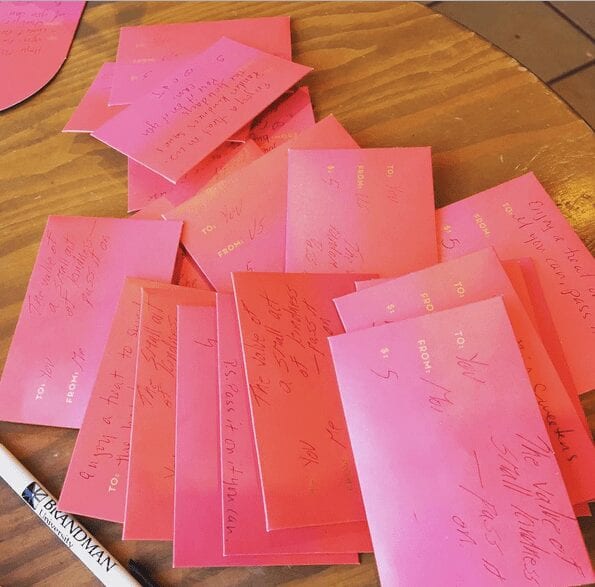 So yesterday afternoon I received a random text from the wife, who is identified on my phone as “Justin Bieber” for reasons best left for another day. This is what she wrote …

This is typical Catherine Pearlman, and one of many reasons it pays to marry a social worker. In short, she cares. She genuinely cares, and considers the happiness of others before her own well being. We discussed the idea a bit, ran it past the kids, then realized we really only had time to do something in the AM, after the children are deposited at school.

Hence, this morning the wife and I hit up Starbucks, purchased 20 $5 gift cards, wrote notes on the envelopes (mine said: “The value of kindness matters. Pass it on!”) and walked up, down, left and right through an enormous parking lot, distributing the goods. It took about a half hour, and was well worth the time. I mean, we’re living in a period of great stress, of mass nervousness and fear. Sometimes, the wife and I both believe, a small moment of decency pays off—even if it’s only the five minutes of drinking an iced coffee.

Anyhow, it was fun stuff. There was a woman with a crying baby, standing behind her car with the trunk open, trying to change a diaper. With her back to us, we placed one of the envelopes in the stroller, and watched from afar as she looked (with what seemed to be genuine surprise). We placed another envelope on the seat of a UPS truck—because those guys work hard. We gave one to a woman pushing Target carts out of the lot, another to a woman limping away from her car in the handicapped spot. Two people were in a car, waiting to leave the lot. The wife said, “We’re handing out free Starbucks gift cards. Want one?”

We gave them two.

I’m not writing this to brag. Or to make anyone feel bad, or make us look good. We have tons of flaws; do some bad stuff; on and on. But there is something to the tiny act of kindness, and how it can help others feel good, that seems to get overlooked this time of year. We live in a season of big gifts, and bright lights, and large quantities of money leaving one hand for another.

PS: I hope this inspires you to try something similarly. It’s pretty easy.

PrevPreviousMartin Shkreli is having a bad day
Next13 days to writeNext