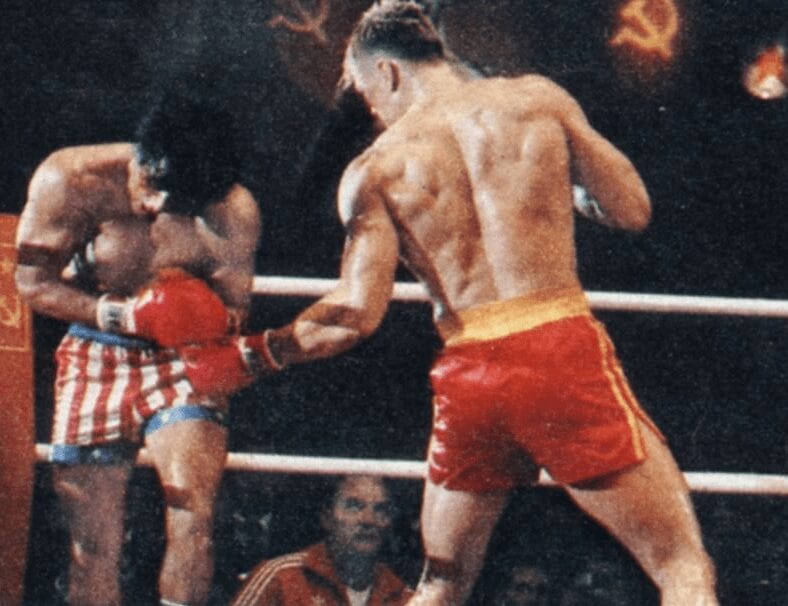 So tonight, during a work break, I found myself watching the Rocky IV fight between Rocky Balboa and Ivan Drago. The wife considers this the best of all Rocky bouts. I couldn’t disagree more. It’s awful. Here’s why:

• Rocky is bleeding profusely from his eye, but nobody in the corner does a thing about it. In fact, Rocky Balboa—world heavyweight champion—doesn’t even have a cut man in his corner. Inexplicably, Drago does have a cut man in his corner. And: A. He’s black (weird, considering he’s the Russian fighter’s cut man in 1984); B. Once Drago is cut in the second round, the bleeding never stops, either. We see the cut man dabbing at Drago’s fact, but it’s unclear why.

• No defense. None. Whatsoever. One guy punches the other guy’s head seven, eight, nine, 10 times in a row, and then the opposite fighter gets his shot. No blocking. Just free head shots. Because, really, why wouldn’t you allow a 220-pound man to hit your face?

• On two different occasions, Drago knocks Rocky down and Rocky simply pops back up. The ref is standing there. We can presume—considering the magnitude of this fight—that he’s officiated other biggies before. Yet he just overlooks knockdowns?

• Rocky’s trainer, “Duke,” was Apollo’s trainer before he died earlier in the film. He also appeared in Rocky and Rocky II. Meaning he’s been in the fight game for many moons. Yet the only advice he gives his fighter throughout the Drago matchup is, “No pain! No pain!” Um, thanks for the tip.

• This isn’t the fight, per se, but the pre-fight. First, Rocky never spars. Like, not once. Instead, he lifts wagons and takes long runs up impossible mountains. Again, Duke the veteran trainer might wanna say, “You know, it’d be good to practice a few rounds, no?” Second, Rocky runs up a mountain in a matter of minutes/hours that would take an expert climber, at best, two days. Third, Adrian’s amazingly powerful emotional speech is pretty much the same one she gave in Rocky III, only significantly worse.