Christmas up the block 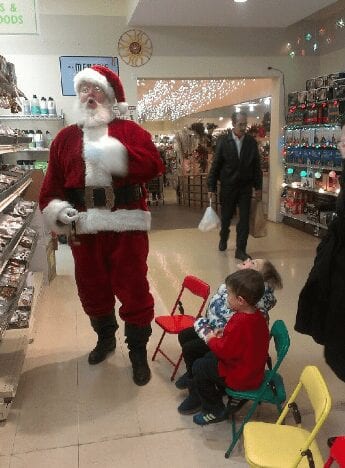 As I’ve strolled through my neighborhood the past few evenings, gazing upon the lights, I’ve been reminded how much I love Christmas.

This is sort of remarkable, because I feel like, in a way, I was raised to hate Christmas. Or, if not Christmas per se, the Christmas season. This comes mainly from my mother, a wonderful woman who, come every December, would complain about the crowds, the fake cheerfulness, the depression, the substance abuses of the season (Mom worked as an addiction counselor). Plus, I was a Jewish kid in a non-Jewish town. As all my classmates talked up Santa and candy canes and stockings, I was left trying to hype the damn menorah. Not a fair fight.

Anyhow, my take on Christmas forever changed when I was, oh, 12 or 13, and I spent much of Dec. 25 two houses up with the Garganos. Now, I’m 97 percent certain that Vinnie and Sheila Gargano would not remember that I hung with them on Christmas 1984 or ’85. I was good friends with their son Dennis, so it wasn’t like my being at their home was any big deal.

But, for me, it was huge. I still remember Dennis calling, asking if I wanted to come over and play with his new toys. Did I! Hell, you know what we Pearlmans did most Christmases? Nothing. We’d sit home, maybe end the day with Chinese food. Mostly, though, it was a time for deep reflection about all the stores that weren’t open. So I walked the 200 or so yards to Dennis’ house and … I swear, I’m not just saying this for a blog post. I remember the tree, covered in ornaments and lights. I remember the smells—Mrs. Gargano either cooking ham or turkey. I remember cans of Coca-Cola. I remember Mr. Gargano on the couch, watching a game and chatting with me. I remember Mrs. Gargano’s joyful late brother, Uncle Gerald, offering me ham to take home. I remember her later mother, a short white-haired lady, sitting quietly in the corner. Dennis’ sister Donna was certainly there (I had a boyish crush on her for years). His little brother John, too.

Dennis’ big present that year was either an Atari 2600 or a woodworking kit. I’m not sure which. But I spent several hours there, and just thought, repeatedly, how lovely it was. Family. Food. A tree. Lights. Togetherness.

From that day on, I never again considered Christmas to be anything but awesome.

I’m better for it.