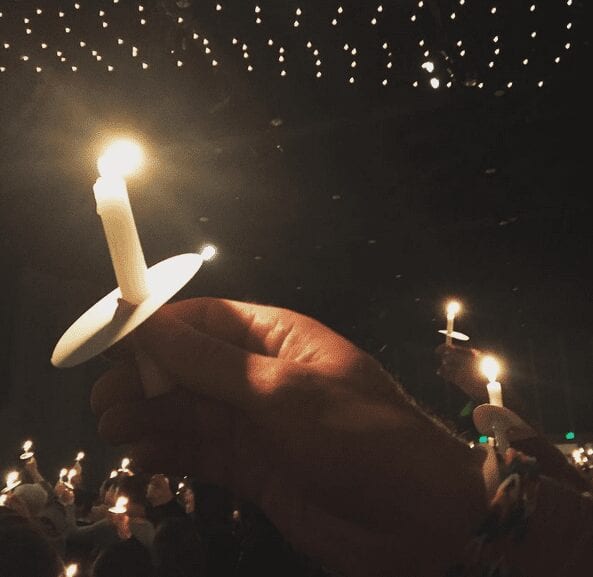 So a few minutes ago I returned home from my first Christmas Eve church service.

That being said, I loved it. True enjoyment, truly fascinating. A friend of mine extended the invitation, just as I invited her to come to my house for Chanukah 1 1/2 weeks ago and, years back, Passover seder with my parents. I strongly believe in this stuff—experiencing the lives of others, trying to figure out what makes different people tick; being open to new ideas. Or, if you’re not open to the idea (aka: I’m not a likely candidate to accepting Jesus Christ as my lord and savior), at least being open to the ideas behind the ideas.

The church I attended is called Mariners Church, about 15 miles up the 73 in Irvine. Although I’ve sat through a pretty large number of services at different places and points in my life, this was my first mega-church gig (technically, a mega-church has more than 2,000 members). Which made it all the more riveting.

A. The music was nothing short of kick-ass. And while “kick-ass” probably isn’t a term one would use in church, it’s a good one to describe the jams. First, there was a full band. And not merely a band—a rock band. Two male lead vocalists, two female lead vocalists, guitarists, strings, a drummer. I’d never experienced this at a church (or synagogue) before, and it was terrific. Plus, they were playing Christmas songs. And I’m a sucker for Christmas songs.

B. The people were lovely. Just a legitimately friendly vibe. Folks introducing themselves, shaking hands, wishing one another a merry Christmas. As I said to my friend as we walked out, I totally get it. I get the appeal. I get the pull. It’s a community of people, bonded by this love for the teachings of Jesus Christ.

C. The message is where, to be honest, they sorta lose me. I’m a fan of peace, love, open-mindedness. So that was all money. But when it comes to the Jesus Christ thing … eh … well, I just don’t feel it. For example, a pastor at tonight’s service spoke of how, until 13 years ago, she was lost and her son was lost. And one night she was just … gone. She didn’t know where her son was; she lost control of everything she knew. Then—she looked up and saw a cross of light. And she knew Jesus loved her son more than even she did, and everything worked out. So, well, go Jesus!

And I have a problem with this. Not the woman’s isolated story, which is fine. But this concept that God—if you seek Him/Her—will look out for you. And the proof is my son and the cross of light. Because, just as an example, on Sept. 11, 2001 nearly 3,000 people died—including the son of my devoutly Christian friends. And a few weeks ago, in San Bernardino, sons and daughters died. Hell, people die all the time. People who pray. People whose relatives pray. People who feel protected by God. So there’s something (to me, at least) arrogant in believing that God loves you, and will protect you—when God doesn’t seem to protect everyone.

And, yeah, I know the rebuttals—God works in mysterious ways; you just have to have faith, etc. But, for me, it doesn’t work. It just doesn’t.

The problem is, we’re often the last to know whether our faith is beneficial or harmful. Sometimes it can be both.

Anyhow, I’m babbling. I loved attending church, I found myself riveted and—best of all—I got to hold a candle. Which, technically, symbolized the passing of Jesus’ love from one member to another.

To me, it was merely a candle.