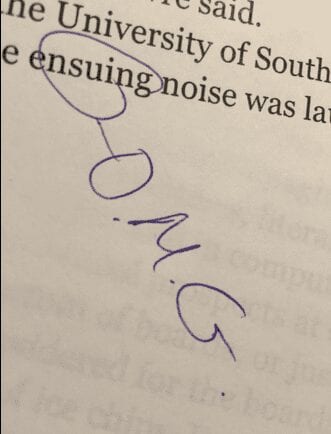 I don’t know if this is true, but I’m pretty sure most writers have their go-to words.

In my case, they change. I go through phases, where some words are hot and some words are OK. This works fine when I’m writing articles. I mean, over the course of 3,000 words, a couple of repeat words isn’t such a big deal.

With a book, though, it’s a different story.

As most readers here probably know, I’m wrapping up the first draft of a Brett Favre biography. As we speak, I’m cutting. I finished my writing a few days ago, and wound up with 188,000 words for what’s supposed to be a 150,000-word manuscript. Hence, now I’m slicing and cutting and chopping and reducing. It’s not a fun process, but it’s an important process. You need to read your stuff, then re-read and re-read. In your head, aloud. You also need others to comb through.

I generally have a team of three prime proofers. One, Casey Angle, is my longtime fact checker. Another, Michael J. Lewis, is one of my closest friends and a veteran journalist. The third is the wife.

We all have our strengths, and the wife’s is a good one: She picks out repeat words. Actually, she doesn’t merely pick them out. She digs them out, pursues them, traps them, circles them, then writes—in large letters—STOP USING THIS!!!! Sometimes she’ll follow with an apology (“Maybe I was too aggressive …”) but it’s never needed. She’s gold.

Past overused words/phrasings have included “hence,” “whereas” and “even though.” This time, my Kryptonite seems to be the dreaded “ensuing.” I break out friggin’ “ensuing” all the time, and I’m pretty sure it’s putting the wife over the edge. The first draft probably has an “ensuing” on every third page. I don’t think she’s missed one yet.