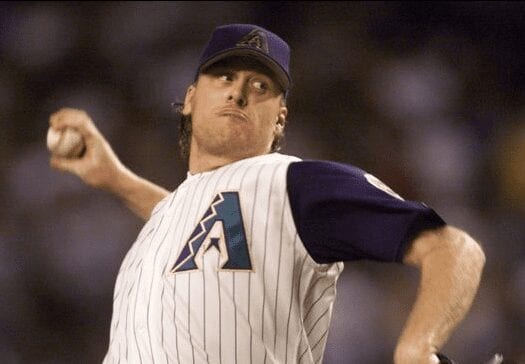 In case you haven’t heard this already, ESPN has fired Curt Schilling as one of its baseball analysts.

The former All-Star righthander is not one to hide his conservative views, and a few days ago he shared on Facebook a pretty nasty photo meant to demean transgenders. Here’s the actual image … 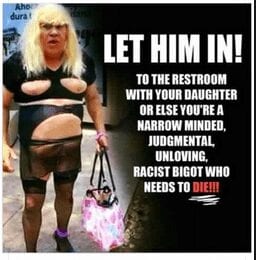 … and these are his words: 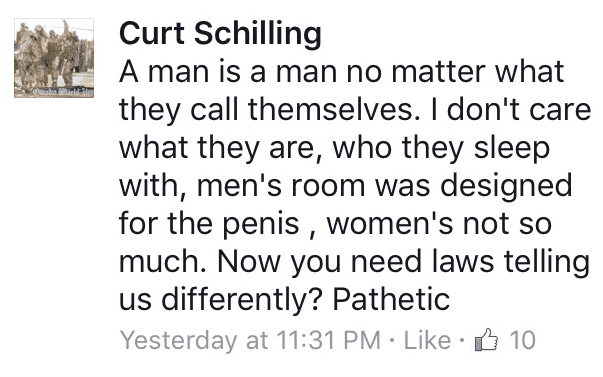 Now, to be 100-percent clear, I have long thought Curt Schilling to be an under-evolved dolt of the first degree. There’s this thing that happens to a lot of professional athletes—namely, they come to think they’re smarter than they actually are. It’s largely a result of we media folks building up their egos with repeated interviews, compliments, etc. For years, Schilling was a press go-to guy. He was well-spoken, quotable, excellent when it came to breaking down everything from the span of nine innings to the intricacies of a single pitch. Shortly after he retired, ESPN rushed to add him to its crew, and with good reason.

So, truly, we are somewhat to blame for Schilling believing himself to be a man of great wisdom.

Despite Schilling’s words, which suck, and his past comments, which also sucked, I rarely like how large sports entities like ESPN handle these things. To drift back in time a bit, in 2000—after my Sports Illustrated profile of John Rocker was released—Major League Baseball suspended the pitcher … and I was furious. Yeah, Rocker was a xenophobic racist dickhead. But if you’re gonna put your employees out there for public consumption, and you urge (and, in some cases, require) them to deal with the media, well, you can’t expect all comers to share your (and my) evolved, liberal view of the world. Not everyone is comfortable with gays. Not everyone things transgender men should use the men’s room. Are their beliefs founded in any logic or decency? No. But we are, largely, a slow-to-learn people. It takes some of us time to accept, embrace, understand. The whole transgender issue is still v-e-r-y new, and I get why it’s uncomfortable for some (educated solely via the exploits of the Kardashians) to accept.

This is especially true in sports—a largely sheltered society where jocks are instructed to turn their thoughts off and their athleticism on. It’s a do-first-think-later world, and to think men like Schilling might be evolved and equipped to handle a changing world is, truly, laughable.

Now, I am not defending Curt Schilling. Again, he’s a worthless pile of shit. But, ultimately, his firing does far more harm than good. Now the right has another gripe with the “liberal media.” Now Schilling returns to his cave to stew over the damn libs silencing him. Now Fox News can continue its “war on …” narrative.