The man who lived next door 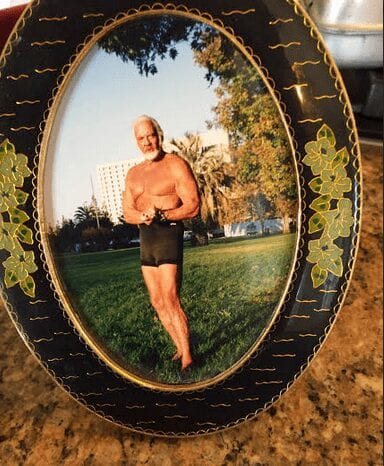 Our neighbors moved out a few weeks ago.

You may well remember them from a past blog post I wrote. They’re elderly. The wife has dementia, the husband all sorts of physical issues. I was called to their house somewhat recently, where I found the man (his name is Dick) in a wheelchair, barely responsive, his pants pulled down to his knees. I called an ambulance, they were both taken away. And now they’re gone, off to an assisted living facility. They’ve lived. Sooner than later, they will die. And I will never know.

Anyhow, this weekend there’s an estate sale at the house. Stuff. Lots and lots of stuff, marked down and ready for you to purchase. The leather chairs. The glasses and plates. The smoker, the wind chimes, the records and CDs and jackets and scarves. There was a big TV and an antiquated stereo system. All books were $2, a tin with push pins was a buck. By Saturday’s evening hours, with the clock ticking away, everything was 50 percent off. Or name your best price. Or just … take.

I strolled through the estate sale with my son. I felt like a vulture. Pick, pick, pick, pick. Two lives reduced to leftover crapola, labeled with an artificial value. All the things that, at one time or another, seemed important. Now, truly, junk. Just stuff. Their stuff yesterday, someone else’s stuff today.

I’m not entirely above being a vulture. I bought two things. The first, for $5, was the woman’s old sewing kid, filled with threads and needles and scissors for my daughter. The second, given for free, was the photograph topping this blog post. It’s Dick, initially unrecognizable, looking healthy and alive and physically potent. I don’t know when it was taken, or where it was taken, or even why it was taken. But it’s a reminder—harsh, rude, damning—how this life thing works for most of us. We’re all, at one time, atop our games; vibrant creatures attempting to conquer the world.

That, however, ultimately dissolves. We turn old and small and feeble, until one day we’re sitting in a wheelchair, pants around our knees.

Until one day, people are rummaging through our life.

So why did I purchase an image of a man I barely know? Because it didn’t seem right, his photograph sitting there, a piece of nothingness with the other nothingness. So I brought it home, and my son placed it with our other pictures, a nod to living and mattering.

PrevPreviousI made a movie poster!
NextOne thing about researching a USFL book …Next